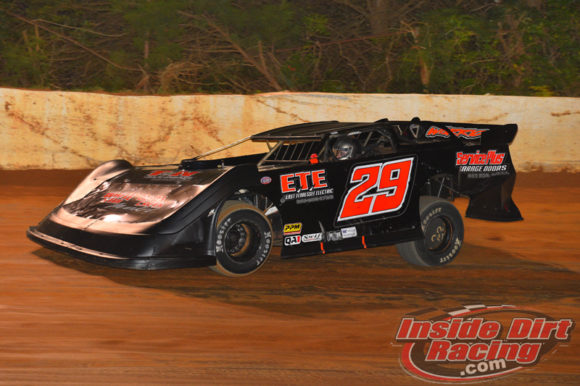 Along with the Southern Nationals on Friday night the 411 Motor Speedway also staged racing action in the Crate Late Model division. Hometown racer Rusty Ballenger eventually beat out the competition pick up the winner’s check valued at $1,500. However, the results are not yet official as post-race technical inspection has yet to be completed.

There were no heat races for this event.

At the start of the 25-lap feature Ballenger went immediately to the lead with Alvey, Sise, Henderson and Lowe in his tire tracks. Henderson moved up early by taking third away from Sise on the second lap while Martin passed by Lowe for fifth on the third circuit.

Ballenger had slipped away from the pack by lap 7 while Henderson, Sise, Martin and Lowe ran in tight formation just behind the second running machine of Alvey. Sise regained third from Henderson on lap 11 which set off a slide by the No. 9 car that brought Martin to fourth and Lowe to fifth as Henderson dropped to sixth in the running order.

Following a lap 20 restart Alvey and Sise exchanged second twice with Alvey eventually holding onto the spot while Ballenger again slipped away from his pursuers. Martin made an attempt to get by Sise that led to contact between the two that sent Sise spinning.

Track officials gave Sise his spot back while sending Martin to the tail of the field.

Ultimately Ballenger would cross the finish line ahead of the pack to score the win. However, after the race tire samples were taken from the winning car to be evaluated in a lab and the engine on Alvey’s second place car was protested and the team refused a teardown which brought about their disqualification.