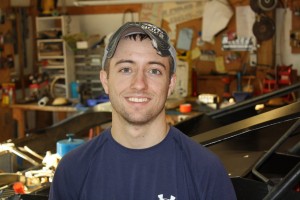 Rusty Ballenger has learned the secret to success over the long haul of a racing season. That secret is consistency, and consistency comes from hard work and dedication. In 2013, the 23 year old Seymour, Tenn. driver applied what he has learned and was rewarded with the 411 Motor Speedway Late Model track championship.

“We ran pretty good,” Ballenger said of his 2013 campaign. “I would’ve like to had more wins, we got three this year. But we only had maybe two DNF’s, so that was pretty good this year. With the competition here at 411, it’s pretty cool to stay up there and be consistent against all those guys.”

The consistency that led to a championship was born out of the work that was done away from the race track.

“A lot of it is just working in the garage, working on that thing all the time,” the Seymour High School graduate said. “Ever since I started racing, I’ve always… when I show up on Saturday, I want to finish. I don’t want to be like some of these other guys who lead a few laps and always run good but then drop out over stuff. I always check everything all week.”

Time management is an important ingredient in Ballenger’s recipe for success as he juggles a full work schedule along with his racing. He works for East Tennessee Metal Fabricators, a small business that does welding and metal fabrication for factories.

“I’ve gotten used to it now, but I’m really the only one who works on it in the garage,” Ballenger said of his 2010 MasterSbilt Late Model. “I work eight to nine hours a day for five days a week, and sometimes six. But when I come home, I’ve already got the whole week scheduled for when I’m going to do my tires, when I’m going to wash it, and so on. And that’s if I don’t break nothing. You’ve really got to work hard throughout the week so on Saturday you have it ready to go.

“It was tough earlier this year. We had one hiccup, and it was when I lost a fan that night it rained and I got up in the wall and tore up all kinds of stuff. It was a whole week of fixing axle tubes and axles and all kinds of stuff. Then when you’re cleaning it you find other stuff that’s broke and bent. That was really our toughest week to get ready, but we came out the next week and finished. It was a lot of work.” 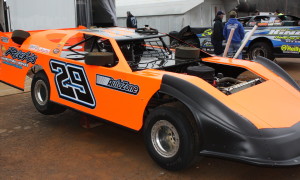 With other tracks around the area offering big money for Limited Late Models, particularly near the end of last season, Ballenger had to resist the urge to go race elsewhere in a Friday night special event with a track championship on the line at 411.

“That championship was for Tommy Newton, the guy who builds my motors. I wanted to win every time I was there, but the championship was more for him and the sponsors and the family,” said the winner of the 2011 Steel Head Nationals at 411. “As far as those Friday night races, I don’t have the motor that a lot of those guys have got. It’s hard enough to run once a week but wanting to race on Friday night then having to turn around and do it all over again on Saturday, it’s just too hard.”

Ballenger will face a significant change going into the 2014 season. Recently, 411 Motor Speedway owner Mitch McCarter announced that his track’s Late Model division will run under the NeSmith Chevrolet rules next year. That means there will only be a few races for the Limited Late Models, or Steel Heads. Instead, the track’s premier class will use crate engines.

“We’re going to run New Year’s Day in the steel head and we’re probably going to run that Valentine’s Day race in the steel head,” the driver said. “Then we’re probably going to run crates. I didn’t like it at first. But with where I’m at with money, it’s a lot better for us. It’s more competitive to run crate motors instead of running these big $20,000 or $30,000 motors. It’s just getting to where with a $10,000 motor like mine, it’s hard to compete when they opened the motor rules up. We were against it at first, but I think we’ll like the crate motors.” 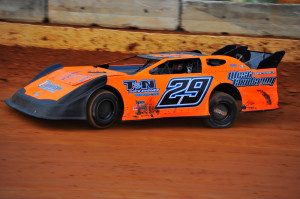 Ballenger typically has one of the most distinctive and recognizable cars on the track with its bright orange paint scheme. However, he said that he is contemplating a change for next season.

Listen to the full interview via YouTube here—> Rusty Ballenger