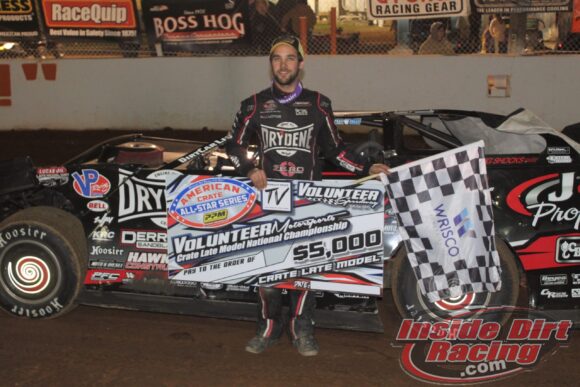 The American Crate All-Star Series took to the track at Volunteer Speedway on Friday night to contest the first of two race nights to be run on that track this weekend. At the end of the night it was Ricky Weiss who stood tall in victory lane over a field of 73 Crate Late Model machines and drivers. The Canadian driver earned $5,000 for his triumph at the Bulls Gap, TN track.

Zach Sise set the fast time in Group A qualifying with a lap of 13.366 seconds around the 4/10 mile clay oval to beat out Aaron Guinn, Jimmy Owens, Tyler Smith, Mark Whitener and Trevor Sise.

Zach Sise was the victor in the first heat race over Drew Kennedy and Tyler Smith while Aaron Guinn took the second preliminary ahead of Matt Henderson and Kyle Courtney.

Trevor Sise crossed the finish line first in the third heat by outrunning Jimmy Owens and Ross White then Ricky Weiss won out in the fourth heat leading Tyler Arrington and Mack McCarter to the finish line.

Jason Welshan captured the fifth preliminary over Bradley Lewelling and Greg Martin just before Carder Miller triumphed in the sixth and final heat ahead of Josh Henry and Kyle Bronson.

At the start of the 50-lap feature it was Zach Sise who shot to the early lead with Weiss, Guinn, Welshan and Trevor Sise following. On the second circuit, Welshan moved forward as he took third away from Guinn. However, a caution for the slowing car of Henry on the fourth lap slowed the action.

On lap 5, it was Trevor Sise’s turn to gain a spot as he passed by Guinn for fourth. In the meantime, the top-3 of Zach Sise, Weiss and Welshan began to drive away from the rest of the field.

Weiss employed a slide job in turn two on the 13th lap of the race to wrest the lead away from Zach Sise and was then able to fight off a crossover attempt to regain the lead by Sise.

The race at the front of the pack tightened dramatically when the top-4 machines found themselves racing among slower cars. Weiss, however, was able to maintain the lead until a lap 30 caution flag waved when Courtney slowed with a flat tire.

During that caution period, the second running car of Sise came to a stop on the backstretch and had to be pushed back to the pit area, ending what looked as if it would be a successful night.

Over the final 20 laps, Weiss got out front and controlled the pace of the race and eventually cruised under the checkered flag to earn the win.