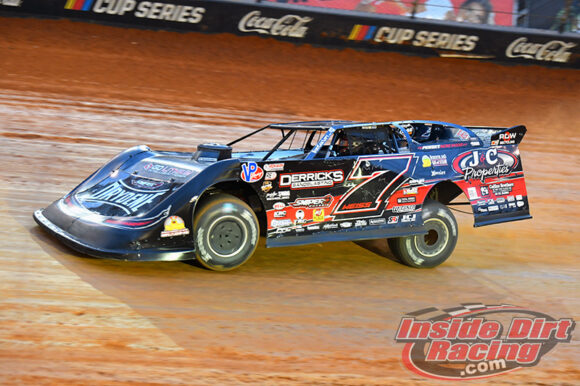 Ricky Weiss got a monkey off his back on Saturday night in the World of Outlaws CASE Construction Late Model Series-sanctioned Bristol Bash. After having come so close several time at Bristol Motor Speedway, the driver who now builds his own race cars found victory lane on the dirt covered NASCAR track.

The Sniper Chassis driver from Headingly, Manitoba, Canada earned a total of $25,000 for his efforts on the half-mile track in Bristol, Tennessee.

A total of 21 cars were signed in for competition.

Feature Re-cap: When the 30-lap feature took the green flag, it was Weiss who went to the early lead with Hammer, Madden, Davenport, and Bronson following in his tire tracks. By lap 3, Madden, who won twice when the XR Super Series raced at BMS earlier this year, charged by Hammer for second and quickly closed in on Weiss.

Further back, Larson looked as if he might repeat his performance of the night before as he moved to the high side to claim the seventh position when he passed Gustin.

Madden closed to the rear spoiler of Weiss on lap 7 and began to apply pressure. On lap 11, Madden made his move and grabbed the race lead. However, Weiss fought back and moved to the inside to retake the lead.

From that point, Weiss began to pull away as Davenport closed in on Madden for the runner-up position. As the laps clicked away, Weiss got very few breaks from slower cars but was still able to maintain his advantage.

Davenport moved around Madden for second on lap 26 but by that time Weiss was out to a solid lead. In the end, the No. 7w machine eventually sailed under the checkered flag for the victory.