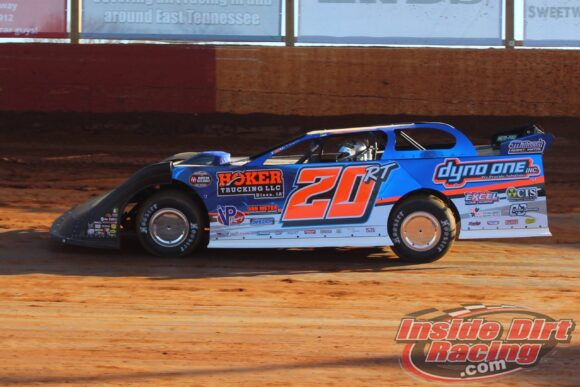 The Lucas Oil Late Model Dirt Series ended its 2021 campaign with its richest races as competitors took to the track for the Dirt Track World Championship. After a night in which the 2021 series Rookie of the Year had to hold back the two hottest driver in the sport, Ricky Thornton Jr. came away as the winner at Ohio’s Portsmouth Raceway Park. The Longhorn Chassis driver from Chandler, Arizona earned $100,000 for his efforts in an event shown live by MavTV Plus.

Qualifying and heat races were completed earlier in the day after that activity had been postponed from Friday night because of rain.

Ricky Thornton Jr. earned the right to start the 100-lap main event from the pole position by virtue of his win in the first heat race ahead of Mason Zeigler and Tim McCreadie then Spencer Hughes took the second preliminary over Shane Clanton and Ryan Gustin

Kyle Bronson defeated Tanner English and Jonathan Davenport in the third heat race of the afternoon.

Devin Moran would start the crown jewel feature from the outside of the front as a result of his win in the fourth heat as he bettered Brandon Overton and Jason Jameson while Chris Ferguson took the fifth heat by outperforming Jimmy Owens and Devin Gilpin.

Scott Bloomquist grabbed the checkered flag in the sixth and final heat over Mike Marlar and Hudson O’Neal.

Following the heat races, Chris Ferguson, who won the fifth heat, and four-time DTWC winner Brandon Sheppard were disqualified for the night by LOLMDS officials because of an altercation that occurred in a common area.

Tyler Erb and Dennis Erb Jr. transferred to the main event from the first B-main then Dustin Linville, Stormy Scott and Steve Casebolt made their way into the feature out of the second B-main.

At the start of the 100-lap feature it was Moran who took the early lead with Thornton, Owens, Hughes and Bloomquist in his tire tracks. Bloomquist and Bronson passed by Hughes on the second circuit to take over fifth and sixth respectively.

Bloomquist continued to show signs of his old form as he swept by Thornton to grab fourth on lap 5. Meanwhile, Moran began to slip away from the pack as he extended his early-race lead ahead of Owens, Bloomquist and Thornton on lap 10. But Thornton would make a comeback as he took to the high side of the track to pass Bloomquist and Owens to move himself back to second on lap 17.

A turning point in the  race occurred on lap 23 when Devin Gilpin spun in turn three leaving the top-5 running Bloomquist with nowhere to go. The famed No. 0 machine broadsided the prone car of Gilpin cause significant damage to both. Bloomquist would be able to return to action following repairs by his crew while Gilpin’s night would end there.

A series of yellow flags and their ensuing restarts would shuffle the field. Moran stayed out front while drivers such as drivers such as Overton, Marlar and Davenport began to rise while Owens and Bronson faded. On lap 36, the race took on the look of other crown jewels when Overton took the lead of the race away from Moran.

After a lap 36 restart, Moran began to fall back through the running order as Marlar and Davenport blasted into third and fourth respectively. At the same time, McCreadie also entered the top-5 just before the halfway mark. However, Thornton was not content to follow Overton’s lead as he closed in and began to challenge to winner of multiple big money races.

During the second half of the race, Overton spent a number of laps fighting back challenges from Thornton while Davenport, Marlar and McCreadie rounded out the top-5.

A lap 82 restart offered Thornton the chance he was looking for as he blasted to the lead ahead of Overton. As the laps began to click away, Thornton maintained command of the race as Overton and Davenport battled for the remaining podium positions.

Ultimately, it would be Ricky Thornton Jr. who would sail under the checkered flag to score the biggest win of his career.

Tim McCreadie cliched the Lucas Oil Late Model Dirt Series prior to the start of racing in Portsmouth while Ricky Thornton Jr. assured himself the Rookie of the Year honors.