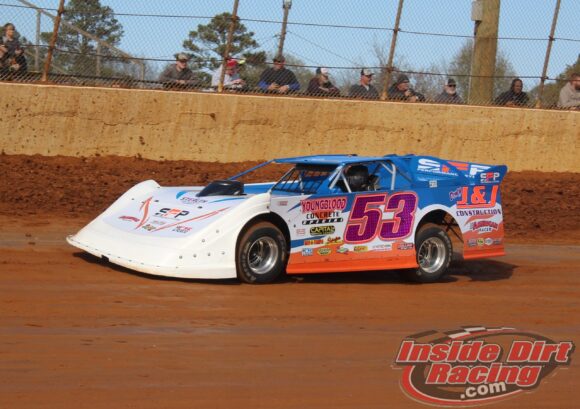 For the 32nd time in the history of Talladega Short Track, drivers and teams assembled to contest the Ice Bowl presented by Racecar Engineering. A large crowd assembled under a clear sky to take in the midwinter event held at the Eastaboga, Alabama facility.

At the end an attrition-filled day on Saturday it was veteran race and series promoter Ray Cook who claimed the victory. After surviving an early incident, the Capital Race Cars driver from Brasstown, North Carolina earned $7,500 from the Valvoline Iron-Man Late Model Winter Series-sanctioned two-day event. The race was shown live by FloRacing.com.

Qualifying and heat races were contested on Friday evening while the feature ran on Saturday.

Heat Race Results: The top-4 from each heat race transferred to the main event.

Feature Re-cap: A multi-car incident occurred just after the green flag waved. That, in turn, precipitated a complete restart. Nipper was eliminated as a result of the crash.

At the start of the 50-lap feature it was Sam Seawright who jumped out to the lead with J.T. Seawright, Cooper, Williams and Dalton Cook in his tire tracks. Another multi-car mishap brought out another yellow flag just after the completion of the first circuit.

On the second attempt to restart after the lap 1 caution Oliver clipped a uke tire at the entrance of turn three and spun collecting several other racers. Oliver’s car suffered damage as did Ray Cook.

Once the race got going, Sam Seawright pulled out to a relatively comfortable lead with brother J.T. Seawright serving as his closet pursuer. Brooks moved by Dalton Cook to claim fifth on lap 6.

A lap 11 caution for Bangs erased Seawright’s advantage just as the race leader had caught the tail of the field. Following that restart, Sam Seawright continued to show the way over J.T. Seawright, Cooper, Williams and Brooks until a lap 19 caution for the slowing car of Seibers again slowed the action.

At the halfway point of the race, Sam Seawright had once more built a sizeable advantage as he closed in on the tail of the field. However, a lap 28 caution for the slowing car of Roland provided the race leader with a reprieve from slower traffic. During that caution period, J.T. Seawright brought his car to stop on the race track and was pushed to pit area ending his run.

After the restart, Sam Seawright continued to lead over Cooper, Brooks, Williams and Jones. Brooks moved by Cooper for second on lap 29. Cooper slowed to bring out a caution on lap 34.

Seawright then led Brooks, Williams, Jones and Ray Cook. Cook moved to fourth on lap 35 but a lap 36 yellow flag for Morrow slowed the pace. Jones got into Williams on the restart causing another multi-car mishap. Craft was also collected.

Seawright. Brooks and Ray continued as the leading trio until another caution flag was displayed on lap 39 when Crigler slowed with a flat tire.

Just after the restart, Cook moved into the runner-up position behind Seawright. However, Seawright slowed on lap 42 with a flat right rear tire to bring out a caution and elevate Cook to the lead.

Brooks surrendered the third spot on lap 43 when he had a flat right rear tire.

Over the closing laps, Cook pulled away from the pack to score his third career Ice Bowl victory.

“I only got to race eleven times last year,” Cook said in victory lane. “You ought not to even own a car if you can only run it eleven times. We’re just so thankful. It’s Talladega and it’s the Ice Bowl. There was about a groove-and-a-half out there. We were just fortunate enough to be able to run right above them and keep the left sides in the rubber. Lucky we didn’t tear it up no more than I did. I guess I was a little aggressive on that restart but I knew I was going to get run over if I wasn’t. Anyhow, we were just fortunate enough to come back up through there. It means so much to get this paint scheme back into victory lane.”

What drivers will have the most success with new teams?