Home Features Ray Cook: “It’s a good time to be a racer” 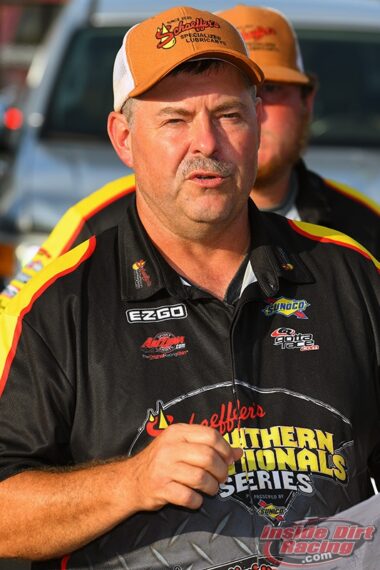 Very few people have as many different perspectives regarding the state of dirt racing as Ray Cook. Driver, track owner, series promoter, and series technical inspector/rules enforcer are just some of the hats to have been worn by the 51-year-old native of Brasstown, North Carolina who has dedicated much of his life to this sport.

Cook sees the current state of affairs in the sport as unprecedented. More money has never been on the line for competitors and there has never been a time when there were so many races scheduled, especially those events that offer $25,000 or more to win. Even with all of his experience in racing, the leader of the Schaeffer’s Oil Southern Nationals family of series has been somewhat encouraged by the changes that have come about recently.

His belief is that those changes have benefitted competitors the most. The former winner of big events such as the Show-me 100 and the Hillbilly 100 would have liked to have been racing for the type of money that is now available back then. At the same time, his hope is that this progression will continue.

“It’s been unbelievable to sit back and watch it,” Cook explained to InsideDirtRacing.com. “It’s a good time to be a racer, for sure. It makes me wish I was racing like I used to for all the opportunities that the drivers have gotten. It’s an unbelievable pace that we’ve set with a lot of races and a lot of money. I hope we can sustain that.”

Even with the sudden acceleration in the number of events and the amount being paid to win those races, Cook sees a continuation in the immediate future.

“I actually asked a guy this week, how long can we stay at this pace and all he said was that’s a good question,” Cook recalled. “I don’t see anybody backing down for 2023, I’ve looked at some of the schedules and it looks to me like we’re going to be up for a repeat so we’ll enjoy it while it lasts. How long will it last? I don’t know, but it’s definitely a good time to be racing.”

The series promoter who has enjoyed success in that realm for an extended period of time believes that the same formula that has always worked will continue to work no matter the number of big races.

“In my opinion, it’s always been this way,” Cook insisted. “The people that work hard and do a good job and have always done well are still doing well. Sometimes weather dictates how people do. I know one track that I work with on tires, it’s an asphalt track, they’ve had 13 rain outs this year. That doesn’t mean they’ve done a bad job, it just means the weather just got ’em.”

So is the rising tide of exposure and available money lifting all boats?

“There’s always different circumstances as to why people do good or do bad, but for the most part, I don’t see anybody going out of the business. I think it’s been good for everybody, or it appears to be. From a series standpoint, I’m hoping to announce our schedule at PRI like we always do and I’ve got more people wanting races this year than I had last year so it seems to be good.”

During the drivers meeting for the FloRacing Night in America show at Cook’s own Tri-County Race Track, the veteran racer and promoter commented that there were drivers there who he would have never guessed would have ever entered an event at the track located in mountainous western North Carolina. And the ‘Tarheel Tiger’ points out that those racers still would never have come to his hometown track had it not been for the series.

Cook serves at the tech inspector for the FloRacing tour.

“All that was made possible because of the streaming like Flo,” he declared. “You take a track like Tri-County, we can’t seat but about 900 people if we’re all good friends. It’s not even possible to pull a show like that off without some outside help. That’s the biggest thing I see, that some of the TV stuff has offered some smaller tracks opportunities that they wouldn’t have ever had.”

What about the bigger and more well known facilities?

“Has it helped the big tracks?” Cook asked. “Some it has and some it hasn’t. Some people can do big races on their own but you could have done a four-day event at Tri-County and still not pull that off just because of our area. It’s a really interesting time to see how it’s going. I think there’s a few negative as there always are but if you do a pro-vs-con analysis, the good line is way longer, I think.”

Because of the money available and the fact that races are now being contested on virtually every day of the week, some competitors are entering more events than ever before.

“It’s a busy time right now and there are lots of opportunities,” Cook stated. “I went to Senoia Raceway(Peach State Classic), and I wasn’t even asking, and I had three different people to tell me that was their 104th race. Back when I was racing a lot if you could get 75 or 80 shows under your belt, that was a really good year. There was only a few guys like a Ken Schrader or a Tony Stewart, who broke that 100 barrier or Sprint Car guys would break it. Nowadays, I bet it’s a double-digit number of guys who went over 100 races this year. That’s unheard of but we’re running as many midweek shows as we are weekend shows now. I guess I’m part of the blame for that because I’ve always been a big advocate of midweek racing, especially for small tracks because we have so much competition on Saturday.”

Should this trend of racing so often and for so much money continue?

“As long as there’s more positives than negatives, we can continue to work on those negatives to make them better. At the end of the day, it’s a lot of work. It boils down to the individuals who are doing it. I know I’ve been busy this year but it’s self-inflicted. It’s hard for me to say no and I try to do as much as I can.”

Turn 2 Blog: Did you foresee a $2 Million winner?