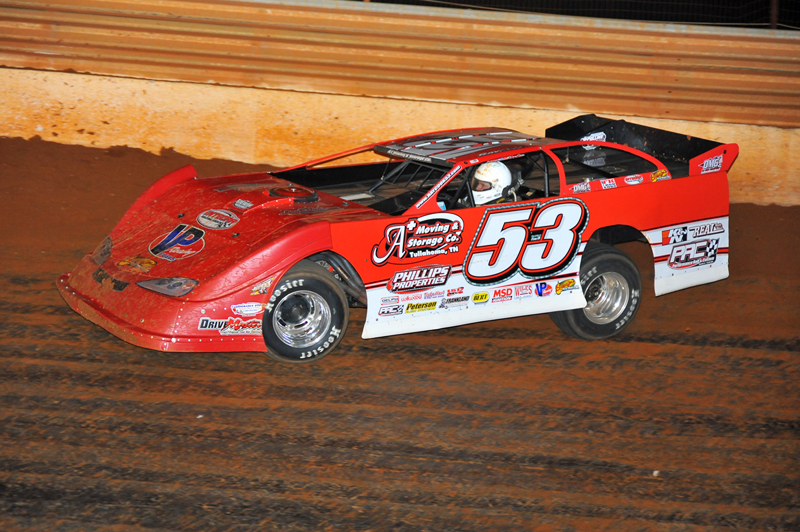 Ray Cook negotiating the high banks of Tazewell Speedway on his way to a win.

Ray Cook surprised himself on Saturday night when he scored a win in his own Southern Nationals Bonus Series event at the Tazewell Speedway. The Brasstown, NC driver took home the $5,000 first prize after surviving a hard fought battle with Vic Hill and Brad Neat in the early stages of the 40-lap feature event.

Cook never competes in either the Spring Nationals or the Southern Nationals(two series’ he promotes) because those events offer points for each finishing position. However, the so-called Bonus races offer no points, so Cook decided to join in on the action in Tazewell.

With an 18 car field, the feature lineup was set entirely by time-trials.

At the start of the feature, Hill bolted to the early lead with Cook and Neat close behind. Those three cars inched away from the rest of the pack as they jockeyed for position in the early going. Meanwhile, Ratliff, Ogle and Roberson staged their own fight for 4th during the initial circuits.

As is so often the case on the tight Tazewell layout, lapped traffic played a role in the race’s pivotal moment. While negotiating through slower cars, Hill, Cook and Neat found themselves three-wide for the race lead. Coming off of turn two, Neat and Hill tangled. Both cars were sent spinning down the back stretch and into the inside wall. As a result of the melee, Cook inherited the lead as both Hill and Neat fell to the tail of the field.

From that time on, Cook would have his way. The ‘Tarheel Tiger’ built leads of as much as a full straightaway in between the multiple caution flags that flew.

But while Cook led, Ratliff had to hold off the advances of Ogle and Roberson, who continued their own fight for top-5 positions. Soon, however, that battle would be joined by Neat as he worked his way back into contention from the rear.

“Man, I can’t believe I won a race at Tazewell,” Cook declared in his post-race interview. “I was able to keep up with Vic at the start of the race. I said before the race that lapped traffic would determine the winner. I hate it for those guys.” 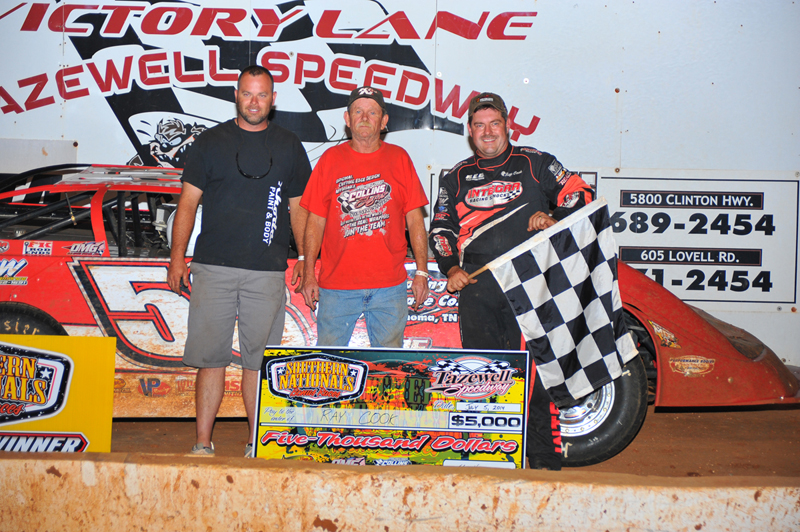 Ray Cook and crew in victory lane at Tazewell.