Randy Weaver reflects on past season and looks forward to 2014 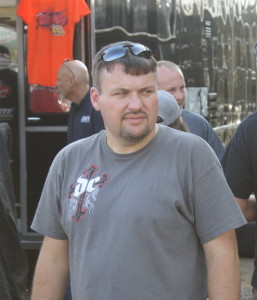 Randy Weaver has been one of East Tennessee’s most successful dirt late model racers over the past decade or so. And in 2014, the Crossville, Tenn. star hopes to take that success to an even higher level.

The three time Southern All Stars Dirt Racing Series champion(2009, 2010 & 2012) is coming off another stellar season. In 2013, he piled up six wins, including an exciting victory in the $10,000-to-win Shamrock at the Cleveland Speedway in March. He also added 17 top-5s during the most recent campaign behind the wheel of his Outlaw Race Products machine.

“That was definitely one of the better races,” Weaver said, reflecting on his Shamrock win. “Like I said back when we won that thing, we didn’t have to win it for it to be a good race. It’s something that the crowds needed and the promoters and the track owners. We need something positive in our sport and anytime we can put on a good show for the fans, that’s pretty important to us.

Weaver, who serves as a distributer of Outlaw’s products from his shop, is pleased with the direction his career has taken of late.

“I couldn’t be happier with Chip and Rusty Stone,” Weaver said in a recent interview. “They’ve given us everything we could possibly want to go race. We just took a two year program to get our feet wet and see what direction we want to go. We’ve also got a business together and it’s been unbelievably busy, and that’s actually slowed us down a little bit from racing.” 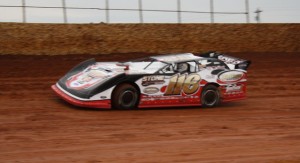 But now the driver of the #116 GRT race car believes it’s time for him and his team to take the next step. He plans on hitting the road beginning in January of 2014 to take on the Lucas Oil Late Model Dirt Series national tour.

“We’re to the point where we’re going to try to jump out on that Lucas deal next year,” Weaver proclaimed. “The business deal will take care of itself. We’re going to go race and see where we end up.”

Weaver acknowledges that the task of taking on a national touring series is a daunting one, but it’s one he feels ready for.

“You know, we don’t really have an off-season anymore,” the veteran driver explained. “We take two weeks at Christmas and then we could go run the Ice Bowl(Talladega Short Track) on the first weekend in January. Then Lucas starts the last weekend in January and here you go.

“We’ve already started making preparations, building some different things to put in the hauler that you’ve got to carry as spares because you might be on the road for two weeks at a time. It’s already started, trying to get all the right people in place so that when we’re out on the road nothing suffers back at the shop.”

But it’s a challenge the 44 year-old driver looks forward to.

“It’s going to be a learning experience,” he said. “I’ve raced a lot of my life, but I’ve never had an opportunity like this to go out and kind of judge ourselves against the best in the business. I know there are going to be ups and downs, but the way I’m looking at it, I’m still going to be getting to do it.”

Weaver has high hopes for how he will perform against the best in the business, but he doesn’t set particular goals as far as a certain number of wins is concerned.

“I’m never big on that,” Weaver declared. “When we run good, I don’t brag. And when we run bad, I sure don’t say nothing. If we could get in and just run top-10 in the points, which gets you some recognition and gets you some show up money to help running up and down the road, that makes it easier on your sponsors and let’s you race longer.

“We’re just going into it open-minded,” he added. “It would be nice to win some of those races, but it would also be nice to run in the top-5 or top-10 in points and be competitive at most of the tracks.”

The LOLMDS season begins for Weaver and his fellow competitors on the weekend of February 6-8 at the Golden Isles Speedway in Brunswick, GA.