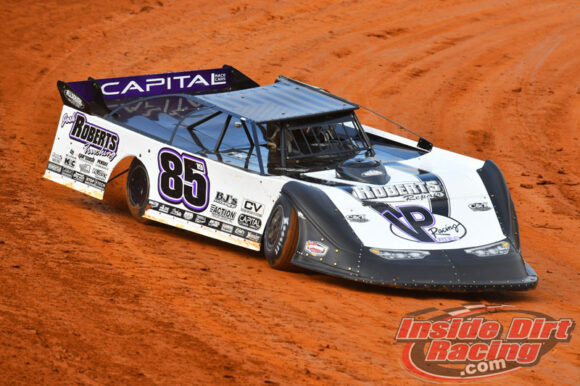 The Schaeffer’s Oil Southern Nationals Series marches on and on Sunday night that march took the Ray Cook-promoted mini-tour to the Rome Speedway. At the end of the night, Randy Weaver, who has piled up numerous wins already in 2021 across multiple series and car types, added another to his list with a dominating performance at the Georgia track. The Crossville, Tennessee driver earned $4,053 for his efforts in a race shown live by FloRacing.com.

A total of 19 cars were signed in for competition.

Randy Weaver was fastest in Group A qualifying with a lap of 14.583 seconds around the half-mile clay oval to beat out Donald McIntosh, Austin Horton, Jensen Ford, Ahnna Parkhurst and Benjamin Cranford.

At the start of the 40-lap feature, Weaver immediately went to the front with McDowell, McIntosh, Leonhardi and Cook in his tire tracks. Weaver began to pull away from his pursuers quickly as he rushed out to a lead of more than one second by the end of the second circuit. However, a caution for a spin by Jeff Neubert briefly slwed the race leader’s progress.

On the lap 3 restart, McIntosh moved by McDowell to take the runner-up position while Horton jumped into the top-5. Soon thereafter, Horton continued to rise as he took fourth away from Cook.

But as had been the case before the race’s lone yellow flag, Weaver broke away from the competition and began building a relatively comfortable advantage. However, slower traffic would play a role as the leading No. 85 machine got caught up behind those he intended to lap which allowed McIntosh to close.

At the same time McIntosh moved in on Weaver, Horton pulled himself up to McDowell’s rear spoiler as those two drivers began a contest for third that would last for the remainder of the feature. But on lap 25, Weaver had extricated himself from slower traffic and again began to pull away.

McDowell and Horton closed in on McIntosh by lap 30. Then on lap 33, Horton drove by McDowell to take third. But in the end, no one could match Weaver as he sailed under the checkered flag to score the victory.