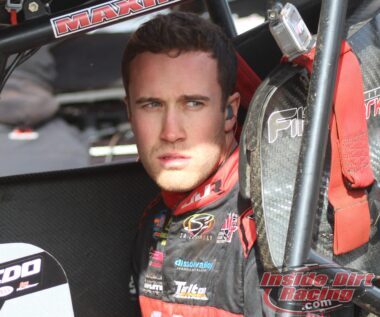 Carson Macedo grew up hoping to someday get the chance to be a World of Outlaws NOS Energy Drink Sprint Car Series driver. Now, the 25-year-old racer is living that dream. And not only is the Lemoore, California native living that dream but he is basking in success as one of the top stars in that form of motorsports along with his Jason Johnson Racing team.

Macedo just wrapped a 2021 World of Outlaws Sprint Car Series campaign in which he scored 11 feature wins along with 41 top-5 results and a series-leading 65 top-10 finishes in the No. 41 machine. The rising star in these high-speed winged cars placed third in the final standings behind champion Brad Sweet and runner-up David Gravel. Each of those statistics were the best of his career to date.

Make no mistake, Carson Macedo is living his dream. At the same time, however, he points out that being a regular on the WoO Sprint Car Series is a unique lifestyle that may not be for everyone. The grind of a 77-race schedule can be exhausting both mentally and physically for anyone who determines to take it on.

“It’s definitely different,” Macedo explained in an interview with InsideDirtRacing.com. “It’s not a typical ‘go home, 9-to-5 everyday’ conventional lifestyle, that’s for sure. We do a lot of travelling. I personally do a lot of flying and there’s a lot of place-to-place and not much regularity. I feel like it’s been really good for me because I’m a single guy that doesn’t have a whole lot of responsibilities or things that need attention during the week or when I’m not home so that makes it a lot easier, but ultimately, it’s really fun.”

While the lifestyle of a Sprint Car racer may not be for everyone, it is the life this fourth-generation racer who has been competing since the age of 4 grew up hoping would be his someday.

“I grew up doing it and my whole life and I hoped I would be a World of Outlaws Sprint Car driver but my parents didn’t really have the money to go Sprint Car racing,” he pointed out. “Luckily, I had family that owned a very successful construction business and they gave me a shot in a Sprint Car when I was 16 and it just kind of catapulted from there. I’m really happy to be in the place I am now. I really enjoy doing what I’m doing, and even though it’s not a normal lifestyle, it has some huge perks and benefits to it. But there are some downfalls to it, it’s hard to have a family and just have that normal type deal but, for the most part, we make the best of it and there are a lot of good people here at JJR that make me feel at home no matter where I’m at in the country and that definitely helps.”

Racing as often as the World of Outlaws NOS Energy Drink Sprint Car Series does and so frequently with one race right after another, it can be great when things are going well and the team is riding a wave of momentum. At the same time, however, it can be very difficult to rise out of a period in which the team is struggling.

“One of the hardest things about the Outlaws tour is that you don’t have consistency in where you race so with that comes struggles and it can be hard to get out of those struggles at times,” Macedo stated. “I see a lot of guys come out here and they get frustrated and eventually either end up giving up or quitting. That’s the biggest thing, you have to just keep pushing on. You can’t give up in those tough times.”

With the highly competitive nature of this form of racing, there is never a break from being tested. And not doing well in one race can lead to a snowball effect for the next race. But during this season, the young driver has found a way to cope with the difficult stretches.

“The World of Outlaws is such a competitive level that when you’re racing night in and night out with them and you might start to get your confidence down like that and you’re travelling to the next place,” Macedo remarked. “You’re on this grind where you’re in a hotel every night and you’re around the same people all the time and you go out and you see the same people. It can be a little mentally grueling. It’s tough to get out of a rut when you’re not running good. Luckily for me, I made a commitment to go home a lot more often and it’s helped me mentally tremendously. I don’t stick around, I fly home and see my family. I do things at home to try and get myself out of that rut. It’s helped me a lot and I feel like I have had a really successful season, not all because of that, but I do feel like it’s important.” 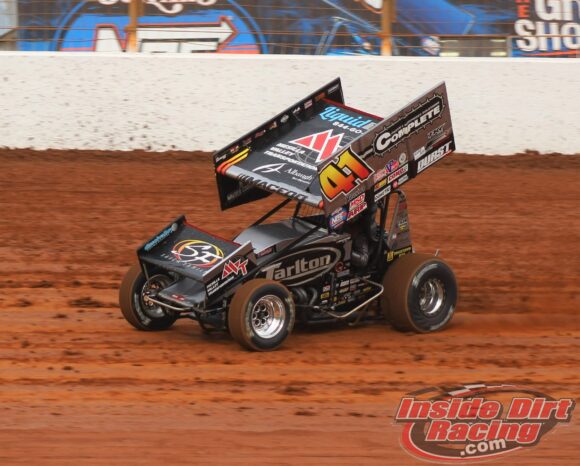 Carson Macedo in the Jason Johnson Racing No. 41

As tough as following the WoO Sprint schedule can be, Macedo believes the teams on that tour may have some advantages over their dirt racing brethren who compete in Late Models.

“I don’t follow the Late Model deal close enough to know how their travel works but I’ve heard from a lot of people that they stay in those toter homes all the time,” Macedo said. “The Outlaws tour is hard enough when you’re racing anywhere from 80 to 100 times a year, that’s a lot of racing, that’s a lot of time travelling, and that’s a lot of time being with the same people. It sounds petty but you have to get a shower and you’ve got to get a bed to sleep in and you’ve got to have some regularity and normality in your life otherwise you wind up in a rut.”

In particular, he believes Late Model teams may have trouble keeping crew members because of the demanding travel that some Sprint Car teams do not face.

“Our guys, we try to take care of them,” he reported. “We just have a truck with a trailer and a lot of that is the way our deal is set up. I get why they stay in a toter home because they are trying to save money and make their budgets work. Ultimately, we don’t have that choice because we have to have a truck with a full trailer because that’s what it takes to fit all of this Sprint Car stuff. We don’t have that upper deck, because with the wings, you can’t make it work. With that, we stay in hotel rooms all year, we budget for that, and we get two separate rooms and it just gives you a place to go and a shower and to debrief and get ready for that next day. I think that’s a big deal. It’s still hard to find people to go out on the road with the World of Outlaws, this life isn’t for everybody.”

Carson Macedo is rapidly emerging as one of the top stars on this tour. The 2022 World of Outlaws NOS Energy Sprint Car Series season will get underway on February 10th at Florida’s Volusia Speedway Park.