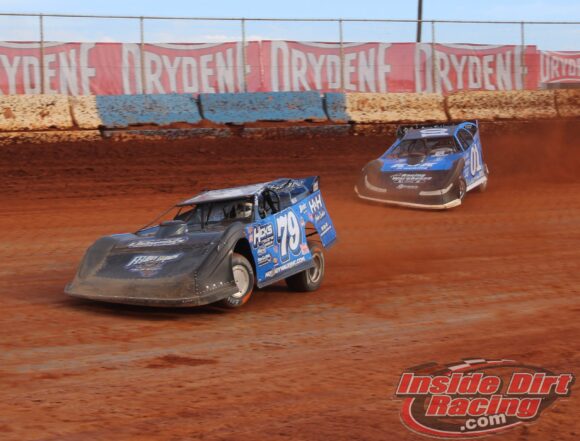 Not that long ago, the winter months were a time in which race teams went into a hibernation mode of sorts.

Most involved in Dirt Late Model racing took time during December and January to hit the reset button as new chassis were turned into completed race cars or old chassis were inspected to make sure they would be ready for another campaign, new engines were installed or older ones were refreshed, battered body panels were replaced with new ones or were straightened and repainted(now rewrapped), and haulers or trailers were refurbished. And now, many of those things still happen but the growing trend over the past few years is for the racing to continue at the same time.

Throw that reset button away because many modern-day racers barely even slow down during the winter much less completely stop.

The racing schedules for December and January are almost as full as they are for every other month on the calendar. The Drydene Xtreme DIRTcar Series races throughout the southeast during the winter months. The Gateway Nationals are now held annually in St. Louis with Super Late Models, Modifieds and Midget Sprint Cars racing indoors in early December. 411 Motor Speedway hosts its yearly Hangover for Super Late Models and other classes around New Year’s Day. And the Lucas Oil Chili Bowl Nationals, held each January in Tulsa, is the most anticipated event on the Midget Sprint Car schedule.

The weather may be cold but the racing action is plenty hot.

And in that spirit, there will be plenty of racing on tap here on this early January weekend as on of the South’s traditional events plays out and one of the West’s annual dirt racing happenings kicks off.

Alabama’s Talladega Short Track will, for the 31st time, play host to the ‘Ice Bowl’ with multiple classes set to hit the clay oval located near NASCAR’s Talladega Super Speedway. A $6,000-to-win purse will be on the line for the Super Late Model division with an additional bonus “bounty” of $1,500 being added to the pot should someone be able to defeat Michael Page in the feature race. For that bonus to be paid out, the five-time Ice Bowl winner has to finish the race on the lead lap somewhere behind the eventual winner.

But more than that will take place this weekend at “The Hornet’s Nest” as another winter series, the Crate Racin’ USA Winter Series will contest the first of that tour’s seven-race slate that will send 604 Crate Late Model teams and drivers from Alabama then into Florida by early February.

Further west, the Wild West Shootout presented by O’Reilly will feature a series of six Super Late Model events over the course of eight days. This year, these races will be contested at a new venue as the Shootout moves from Arizona, where it had been held for the past 15 years, to the F.K. Rod Ends Speedway Park in Vado, New Mexico. This series, which will conclude on January 16th with a $25,000-to-win feature, has typically drawn some of the biggest names in Dirt Late Model racing and that’s likely to be the case again in 2022.

All of this racing is set to take place before the “official” start of the season when the two national touring series along with a few regional tours will head south for Georgia-Florida SpeedWeeks in late January.

So no, winter is not a time for racers to recharge anymore. Nowadays, everyone involved in this sport has to keep those batteries charged all year round.