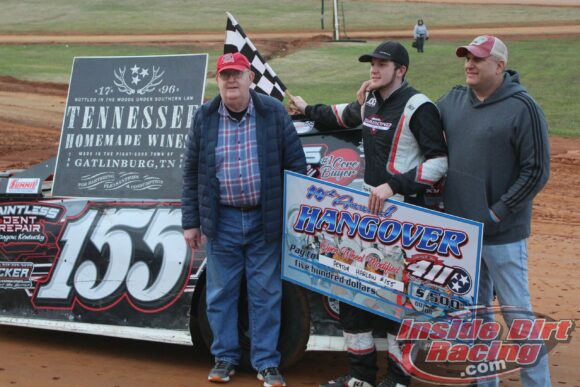 As part of the first day of the Hangover event at 411 Motor Speedway the Modified division took to the track for the first of its two weekend feature races. In the end it was Peyton Harlow who made a late race charge to earn the $500 victory and the accolades.

Wayne James and Andy Sherley won the two B-main races used to set the remainder of the starting lineup.

Arms shot to the early lead at the start of the 20-lap main event as he showed Lee, Hamby, Miller, Harlow and Nicely.

A key moment in the race would occur during a lap 3 restart. As the cars sailed into turn one, Lee made a bold move to the inside of Arms. Lee’s car moved up the track into Arms which sent the No. 4 machine into the turn two wall. The resulting damage ended the race for Arms while Lee remained on track and in the lead.

The action became even more intense following the lap 3 restart as Miller, Hamby, Harlow and Nicely ran in tight formation and exchanged positions lap after lap. On lap 9 the cars of Hamby, Nicely and Miller raced three-wide down the back stretch. After being squeezed, Nicely spun to bring out a caution.

Harlow began his move forward on lap 12 when he took third from Miller. That move continued on lap 14 when he passed by Hamby for the runner-up position.

With four laps remaining, Harlow took the lead from Lee. From that point, the No. 155 car sailed toward the checkered flag. 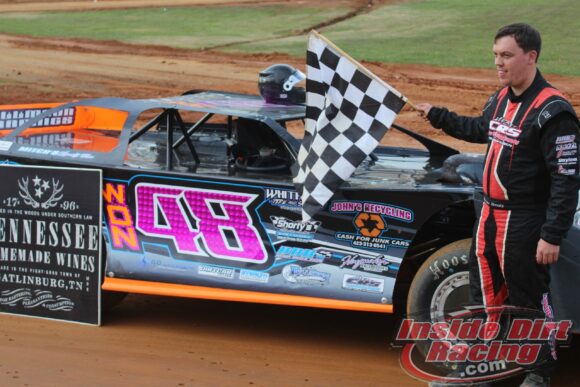 The 602 Sportsman Late Model class also entertained fans as part of Friday’s racing action. When all was said and done, it was Booger Brooks who picked up the $600 check for his triumph in the feature.

Ricky Smith proved to be quickest in qualifying for the 602 Late Models as he clocked in at 14.823 seconds to better the efforts of Eli Beets, Logan Brooks, Nick Perry and Darren Deverell.

At the start of the 20-lap feature it was Smith who would take the early lead ahead of Brooks, Beets and Perry. Brooks wasted no time in getting to the front as he passed by Smith on the second circuit to assume command.

From that point, the race was essentially for second in a feature that would ultimately run caution free.

Perry followed Brooks through on the second lap to grab the runner-up position with Smith and Beets close behind. For the next several laps the top-4 front runners would pull away from the rest of the pack to settle the issue among themselves.

Smith moved back around Perry with an outside move to retake second on lap 8. With just five laps remaining, however, Perry would move back around Smith.

Perry’s gain proved to be short lived as Smith again took second back on lap 17.

But in the end Brooks pulled away to score the win.