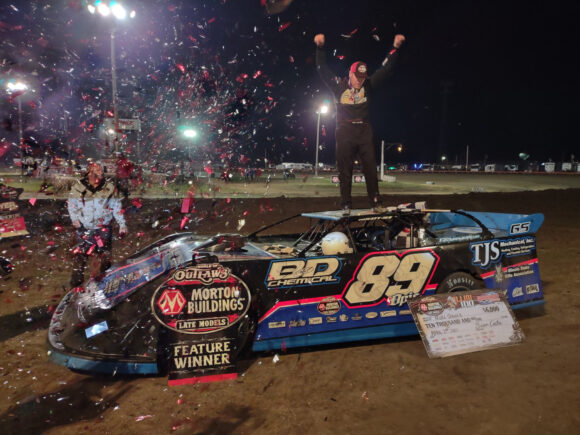 The World of Outlaws Morton Buildings Late Model Series ventured to Farmer City Raceway on Friday night for the first of a two-race weekend that will culminate on Saturday with the $20,000-to-win portion of the Illini 100. At the end of the first night’s activities, it was Mike Spatola who hoisted the winner’s trophy in victory lane at the Illinois facility. The home state driver earned $6,000 for his efforts.

A total 46 cars were entered for competition.

Bobby Pierce was fastest in Group A qualifying with a lap of 12.535 seconds around the quarter-mile clay oval to beat out Ryan Unzicker, Ricky Thornton Jr., Brent Larson and Brian Shirley.

The quickest in Group B time-trials was Taylor Scheffler with a time of 12.478 seconds topping Mike Spatola, Darrell Lanigan, Jimmy Mars, and Devin Moran.

Brian Shirley was victorious in the first heat of the night over Bobby Pierce, Ricky Thornton Jr., and Scott James while Ryan Unzicker beat out Shannon Babb, Brent Larson and Shane Clanton in the second preliminary.

Rick Eckert beat out Boom Briggs and Trevor Gundaker in the first Last Chance Showdown just before Brandon Sheppard took the final LCS ahead of Rusty Schlenk, and Devin Moran.

At the start of the 25-lap feature it was Unzicker who grabbed the early lead ahead of Spatola, Scheffler, Babb and Shirley. On the third circuit the cars of Babb and Shirley went side-by-side for third.

On the fourth lap, Spatola took the lead away from Unzicker as Shirley and Babb continued to fight for third. That race was joined by Pierce on lap 8 as Babb, Shirley and Pierce went three-wide for third with Pierce eventually taking the position.

Spatola looked as if he might pull away but lapped traffic would become a factor by lap 12. Pierce then took to the high side and swept by Unzicker to take second. On lap 15, Pierce then closed in on the rear spoiler of Spatola for the race lead just before a caution flag waved for Brent Larson.

After a second yellow flag, Pierce and Shirley had contact with each other which sent Shirley back into the pack as Pierce continued his fight within the top-3 until the final caution of the night was shown to the field when Thornton spun.

Following the lap 18 restart, Spatola and Unzicker battled for the lead with Spatola on the top lane and Unzicker down low while Pierce ran just behind the front runners. As the laps wound down, those three cars continued to run in tight formation until Spatola finally beat the field to the checkered flag.