The rest of the racing world found out something on Thursday night that those who follow Dirt Late Model racing have known for quite some time. And that fact is that Mike Marlar is a very talented wheel man. The Winfield, Tenn. driver earned a very impressive fourth place result in his first ever NASCAR Gander Outdoors Truck Series start at Ohio’s Eldora Speedway.

Marlar drove the No. 33 Reaume Brothers Racing Toyota on the famed clay oval owned by Tony Stewart. The best finish in 2019 for that truck prior to the Eldora Dirt Derby had been a sixth place effort in the season opener at Daytona International Speedway with Josh Reaume driving. No other finish inside the top-10 had been recorded by the No. 33.

“4th @eldoraspeedway are you freaking kidding me!?” was the excited post made on the Reaume Brothers Racing Facebook page. 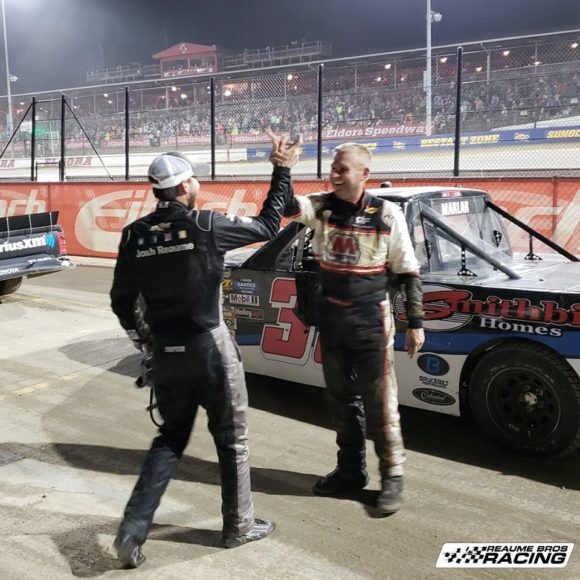 The Eldora Dirt Derby is the only race held on a dirt track currently sanctioned by NASCAR’s top-three divisions. Thursday night’s event was the seventh visit by the NGOTS to the track known for hosting events such as the Dirt Late Model Dream and the World 100 for Dirt Late Model machines and the King’s Royal for Sprint Cars.

Marlar’s credentials on dirt are impressive. The ‘Winfield Warrior’ was the 2018 World of Outlaws Late Model Series champion and is a two-time winner of the prestigious Knoxville Late Model Nationals at the historic Knoxville Raceway in Iowa.

After a spin in his qualifying race, Marlar started the 150-lap main event from the 23rd position but worked his way forward by passing other trucks and using pit strategy. However, there were issues encountered by the driver and team during the race.

“It was a crazy race ” Marlar told Fox Sports in his post-race interview. “I’ve just never done it before and everything was a first for me. My radios fell out after the first stage when I was reaching to get my Swiffer to clean my windshield. I went through half the race before I finally got my earphones back in.”

Marlar then added that no racer could resist the thrill of what he had just been able to do.

“It’s an awesome, awesome race,” Marlar added. “Every little kid in the world dreams about NASCAR and as racers start racing, you know, deep down everybody wants to race NASCAR. It’s awesome that we got to do it and had such a great finish tonight.”

Marlar had originally intended to go on to Cedar Lake Speedway in Wisconsin for the $50,000-to-win USA Nationals for the World of Outlaws Late Model Series but a social media post later stated that due to the lateness of his ability to leave Eldora he would instead go to Indiana’s Brownstown Speedway on Saturday night for a Schaeffer’s Oil MARS Series race that will pay $10,000 to the eventual winner.