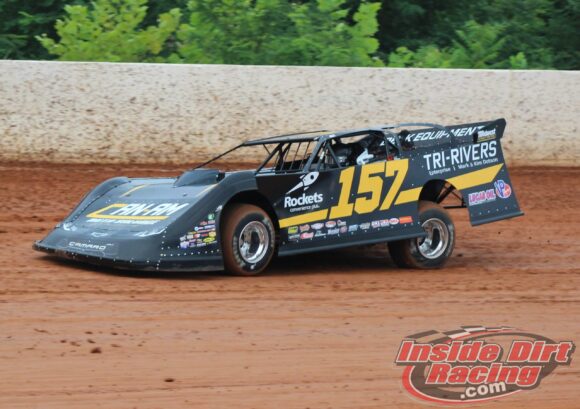 After two nights of preliminary action, the Knoxville Raceway played host to one of Dirt Late Model racing’s crown jewel events in the Lucas Oil Knoxville Late Model Nationals. At the end of an dramatic night of racing on the Iowa track it was Mike Marlar who would receive the accolades for claiming a prestigious victory. The Longhorn Chassis driver from Winfield, Tennessee earned $50,000 for his efforts in a race shown live by MavTV Plus.

The starting lineup for the main event was largely determined by a points system employed from the qualifying, heat race, and feature racing on Thursday and Friday. Those not locking into the top-24 by way of that points system were entered into one of two B-main races.

Here was the full starting lineup for the feature:

At the start of the 100-lap feature it was McCreadie taking the early lead with Erb, Marlar, Strickler and Sheppard trailing. Pearson and Sheppard went on the move on lap 6 when they passed by Strickler for fourth and fifth respectively.

McCreadie found himself in heavy traffic by lap 10 which allowed Erb to close in. Erb took advantage of those slower cars one lap later as he took the lead away from McCreadie.

On lap 14, the second place driver in the series standings began to show signed of smoke which would end Davenport’s night seven laps later. On the lap 21 restart following Davenport’s issue Marlar would surge to second behind Erb.

Another yellow flag would be displayed on lap 27 when Pospisil and Hughes were involved in an incident. Drivers seemed to be logging laps following the restart until the leading car of Erb slowed with a broken rear end gear on lap 40 to bring out a caution flag.

Lucas Oil Late Model Dirt Series officials then opted to use the lap 40 caution period as a previously planned fuel stop. At the time of the restart it was McCreadie leading Marlar, Pearson, Weiss and Sheppard. The Best Performance Motorsports crew was able to repair the Erb car prior to the restart.

Marlar went to the lead following the lap 40 restart and paced the field until the halfway point when he led McCreadie, Weiss, Pearson and Sheppard. Then, McCreadie would pull to the rear spoiler of Marlar on lap 53. But Marlar fought off the challenge for the time being although McCreadie kept the race leader in his sights.

Just behind, Weiss was working to hold back a resurgent Pearson who was driving his new Jason Papich-owned ride for the first time this weekend. Pearson would eventually take the spot with less than 40 laps remaining.

A lap 74 caution for the slowing car of Thornton bunched the field. Just before the yellow flag, Erb had worked his way back to the sixth position.

Erb re-entered the top-5 when he passed O’Neal on lap 77. Just ahead of him, Weiss and Pearson battled for the third spot as those two cars run multiple laps in side-by-side formation.

McCreadie issued a challenge to Marlar for the lead of the race on lap 86 and even drew alongside briefly. McCreadie took the lead on lap 89 but Marlar regained the position one lap later. After the two worked their way around a slower machine, Marlar opened up an advantage of a few car lengths with five laps to go.

Marlar continued to maintain that lead as he went on to score the third Knoxville Late Model Nationals win of his career. The veteran driver has won his last three starts in this race. It was his first Lucas Oil win of the 2021 season.