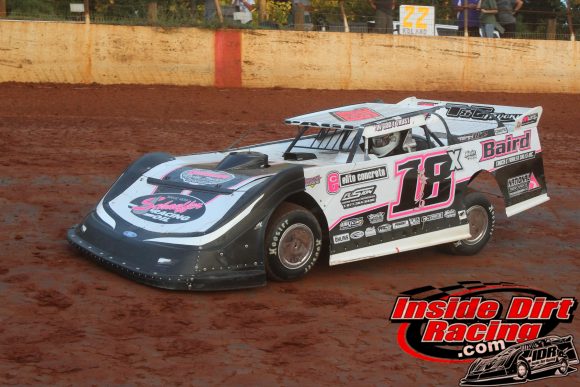 As is becoming the new way of doing things, another Dirt Late Model event took place with no fans in the stands due to social distancing regulations resulting from the COVID-19 pandemic. Thursday night’s race took place at Senoia(GA) Raceway in an unsanctioned show that was broadcast live by DirtonDirt.com and FloSports.com. At the end of the evening it was frequent Georgia front runner Michael Page who drove his Stinger Race Car to the $5,000 first prize.

The top-3 from each of the two qualifying groups would be locked into a dash race that set the first three rows for the main event.

Shane Clanton was the fastest qualifier in Group B time-trials with a lap of 15.382 seconds around the 3/8 mile gumbo clay oval to beat out Kyle Bronson and Tyler Millwood.

Brandon Overton led the way in Group B qualifying with a mark of 15.660 to better the efforts of Spencer Hughes and Michael Page.

Will Roland won the first heat race of the night over Mason Massey, Joey Armistead and Pearson Lee Williams while Riley Hickman won the second preliminary ahead of Peyton Freeman, Donald McIntosh and Ashton Winger.

At the start of the 40-lap feature it was Page who took the early lead ahead of Clanton, Overton and Hughes. Bronson began to move forward on lap 2 when he entered the top-4.

The front running trio of Page, Clanton and Overton broke away from the rest of the pack by lap 4. However, Bronson closed in on the top-3 to make it a four car battle at the front of the field on lap 8.

Overton worked inside of Clanton in an attempt to take the runner-up position on lap 16 but the No. 25 held on to the spot. Two laps later the leaders found themselves fighting for position while in the midst of heavy traffic.

Clanton moved inside of Page in a bid to capture the lead. However, the first caution of the night negated the move. On the ensuing restart, Overton was able to take second away from Clanton. Then Clanton came back on the inside of Overton, but again, a yellow flag negated the move.

After a couple of yellow flags on lap 26, Clanton eventually returned to second with Bronson taking third from Overton. From that point, Page pulled out to a relatively comfortable advantage and held the lead until he sailed under the checkered flag.