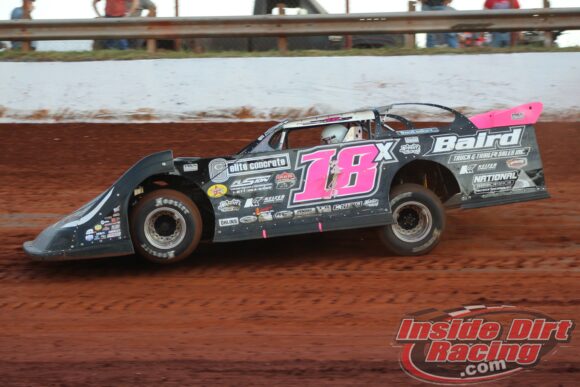 With only three races remaining on the 2019 schedule, the Lucas Oil Late Model Dirt Series made its way to the Dixie Speedway for a $12,000-to-win feature event on Saturday night. When all was said and done it was local driver Michael Page who left the Woodstock, Georgia facility with the winner’s trophy and the first place payout. It was the home state racer’s second LOLMDS victory on this track in three years.

Jimmy Owens proved to be the fastest in Group A qualifying as he toured the clay oval in 15.325 seconds to better the efforts of Dale McDowell, Chris Madden, Brandon Overton and Billy Moyer Jr.

Michael Page set the fast time in Group B time-trials and overall with a lap of 15.241 seconds beating out Jonathan Davenport, Don O’Neal, Hudson O’Neal and Devin Moran.

Jimmy Owens earned the pole position for the feature by winning the first heat race of the night ahead of Chris Madden, Billy Moyer Jr and Cory Hedgecock while Dale McDowell took the second preliminary over Brandon Overton, Shanon Buckingham and Josh Richards.

Michael Page would start the main event from the outside of the front row by virtue of his victory in the third heat by topping Devin Moran, Don O’Neal and Will Roland just before Jonathan Davenport won the fourth and final heat of the evening over Donald McIntosh, Tim McCreadie and Hudson O’Neal.

At the start of the 50-lap feature it was Page who beat Owens to the first turn and emerged onto the back stretch with the lead of the race. McDowell, Davenport and Madden trailed the lead duo in the early going. However, Madden was not content to sit still as he took to the outside groove and passed by McDowell for fourth on the third lap then used the same maneuver to get around Davenport two circuits later.

Page would control the pace of the race as he led the top-5 in a line until the front runners encountered slower traffic on lap 15. With the feature running caution free, lapped traffic would be a factor from this point of the race until the end.

Owens was able to close in on the rear spoiler of Page but he was never able to get a run that would bring him alongside the race leader.

At the race’s midway point, the recently red hot Overton began to move forward as he passed by both McDowell and Davenport to pull into the fourth spot. Then with eight laps remaining in the main event, Overton continued his run forward as he moved around Madden to claim third.

But no one would catch Page as he sailed under the checkered flag to seize the win.