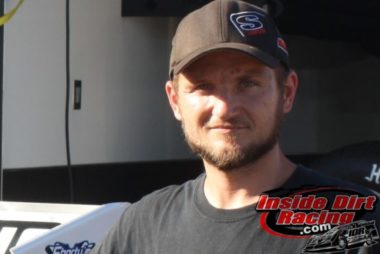 Page took the lead on lap 15 and then held off a late race challenge from the Newsome Raceway Parts Crate Racin’ USA Dirt Late Model Series point leader, and local crowd favorite Wil Herrington of Hawkinsville, GA in the 5m Construction Rocket. Page held off Herrington to take the checkered flag with a .349 second margin of victory in front of a record crowd at CMS.

Page was full of emotion as he took the stage and worked through the moment, letting it all sink in. He first thought of his father who was not at the race and was at home fighting an illness, and then he held his four-week old baby and a smile came across his face.

“This is the biggest win of my career and I wish my Dad could have been here tonight, as he is home and not doing too well,” Page said fighting emotions. “This trophy will make him feel better, and this $20,000 will be a good start on this young one’s college fund. I knew Wil (Herrington) was coming and I knew I’d have to battle with him at some point in the race.”

Looking down from the stage at his race car, Page was in amazement, as he described the machine that carried him, not only to the World Championship Race victory, but many other wins through the years.

“I’ve got a worn out and twisted 2004 chassis and a four-year-old engine,” Page said. “If you ever looked under this car, it would scare you. I’ve tried to run newer stuff, but it just didn’t feel as good, or was as fast as this old car. We just keep dragging this old car out and win races with it.”

Following Page and Herrington under the checkered flag was Randy Weaver of Crossville, TN in the B&M Concrete CVR in third, and Kyle Bronson of Brandon, FL started the Brandon Ford Rocket 17th and finished fourth to earn the Knowles Race Parts and Bodies Hard Charger of the Race Award.

After racing with another series in Ohio on Saturday night, Bronson missed Qualifying and Heat Race action at Cochran Motor Speedway. Bronson has won the Chevrolet Performance World Championship Race for the last three years and drove all night to start on the tail of a B-Main Race for a chance to make it four in-a-row.

After starting 13th in his B-Main race, Bronson had to finish in the top three to make the Big Show.  The capacity crowd cheered Bronson on as worked his way through the field and finished a strong second to make the race.

Dylan Knowles of Lanett, AL took the fifth spot in the K-Line Logistics Rocket and sixth went to Ricky Culpepper of Hamilton, GA in the JC Construction Special. Ben Faircloth of Swainsboro, GA earned the Fullmoon Graphics “Lucky 7” with a seventh-place finish in the Sunbelt Heating and Air Special.

Corey Dunn of Milledgeville, GA drove the Georgia Timber CVR to an eighth-place finish and was the Cruise With The Champions Rookie of the Race. Cruz Skinner of Oxford, AL was ninth in the Skinner’s Body Shop Rocket and Jeff Mathews of Brandon, FL rounded out the top ten in the CURS Rocket.

Matt Henderson of Loudon, TN took the Boyd Built Fabricators Fast Time Award in Group Qualifying among the 56 entrants on Saturday night with a lap around Cochran Motor Speedway in 15.002 seconds driving the R&W Properties CVR.  Henderson was involved in a hard crash in his heat race and had to take the Fast Qualifier Provisional and start 22nd in the World Championship Race. Henderson and his crew had to thrash to fix his race car, and the driver rewarded his crew with a 12th-place finish.

Joseph Joiner of Milton, FL won the 20-lap Non-Qualifiers Race after starting ninth in the Hunt The Front Special. Joiner, instead of taking the $600 for the win, elected to start 25th in the Chevrolet World Championship Race. Joiner charged to a 13th-place finish to earn the VP Racing Lubricants Slick Move of the Race Award.

After each driver crossed the stage on the front straightaway during driver introductions, the Chevrolet Performance 604 Circle Track Engines came to life and outside front row starter Sise took the lead from polesitter Page at the drop of the green flag. Following Sise and Page were Herrington, Knowles, and Mark Whitener of Middleburg, FL in the Baker Farms Special.

Sise began to pull away from Page, and the leader encountered the cars on the tail end of the lead lap on the eighth circuit around Cochran Motor Speedway. Page was able to close in on Sise to challenge for the lead. Sise tried to lap a car with an outside move on lap 15, and that opened the door for Page to dive underneath Sise and take the lead.

Herrington got inside Sise in turn two on lap 21, and the pair raced back to turn four side-by-side before Herrington was able to take the spot. Whitener threw one of his slide job passes on lap 22 and got two for one, moving from fifth to third.

The first of only four caution flags in the 75-lap race came out on lap 29 when T.J. Brittain of Centre, AL stalled the Brittain Hauling Warrior in turn two. That set up the Dixie-Style Double-File Restart with Page in front of the pack as Herrington, Whitener, Weaver, Sise, Knowles, Faircloth, his brother Jeremy Faircloth of Swainsboro, GA in the Faircloth Forestry Service Special, Bronson and Dunn doubled up behind the leader in second through tenth respectively.

Sise spun out of the fifth spot in turn two on the restart, and on the next drop of the green flag, Whitener drove around the outside of Herrington to move up to second, and Bronson hustled up from eighth to fifth.

Page caught lapped traffic at the halfway point of the race on lap 38, while Herrington drove under Whitener to reclaim the second position. Three laps later, Whitener and Weaver got by Herrington dropping him to fourth.

On lap 47, Whitener tried to get past a lapped car on the outside, but lost traction and dropped to fifth with Weaver, Herrington, and Bronson moving up to second, third and fourth respectively. Herrington was able to retake the second spot for a second time in the race, getting inside Weaver on lap 66.

The longer the race went green, the faster Herrington got, as he reeled in the leader in the closing laps of the race. Herrington caught Page on lap 67, but he had to stay in the sweet spot of the race track, or risk losing the second spot. The caution came out on lap 69 when Kelly Walker of Moultrie, GA stalled the Lasseter Tractor Company Special in turn three.

Page went unchallenged on the restart, and the field closed up for the final time for a lap 71 caution when Whitener sailed off the backstretch. Page hit his marks in the five-lap dash to the finish, keeping Herrington three car-lengths behind him.

Newsome Raceway Parts gives a portion of the sales from each Chevrolet Performance Circle Track Engine sold back to the Crate Racin’ USA Point Funds in four different Divisions. Each economical Chevrolet Performance Circle Track Engine is built and sealed at the factory to prevent any expensive modifications. To place an order call 1-877-497-3624.

OFFICIAL RESULTS OF ROUND  9 AT COCHRAN MOTOR SPEEDWAY IN COCHRAN, GA FOR THE 16TH ANNUAL CHEVROLET PERFORMANCE WORLD CHAMPIONSHIP RACE ON 9/6/2020: