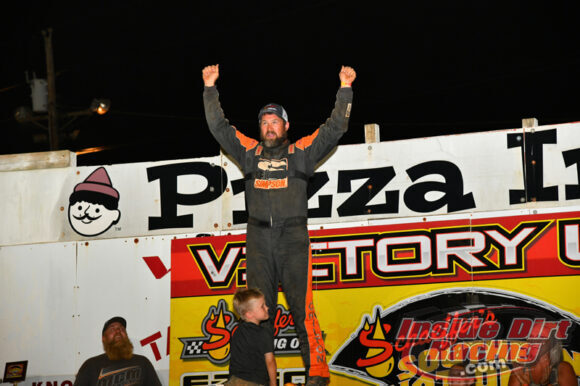 The possibility of a regional driver, or one less known on the national stage at least, stepping up to claim one of Dirt Late Model racing’s crown jewel events always makes for an intriguing storyline. Coming into this weekend’s North-South 100 one regional driver who has been experiencing a bit of a hot streak has been Salvisa, Kentucky’s Michael Chilton. During the month of July, the 35-year-old racer scored three significant victories.

Two of those recent wins, a Valvoline Iron-Man Late Model Series race at Ponderosa Speedway and a Schaeffer’s Oil Southern Nationals feature at Tazewell Speedway, paid out $10,000 to the driver of the No. 97 Rocket Chassis machine and his team.

One key to Chilton’s resurgence has come about as a result of a change in rides.

“We brought our old car back out and it has always treated us pretty good,” Chilton explained in an interview with InsideDirtRacing.com “We got it out and it’s been pretty good right out of the box. We really haven’t had to mess with it very much. I don’t know, everything went together pretty good on it.”

But it might not have been just the car that had caused some early season woes.

“We’ve been making good decisions at the race track and not tuning ourselves out,” Chilton went on. “I think we were over-tuning our other car. But with this one we kind of got back into the routine of doing what we knew and it’s working.”

Once a team’s results start to trend downward, recovery can be made more difficult as the search for solutions can sometimes lead the racer astray. That might have been part of the problem during the first half of the season.

“If you get a little bit off, you get to searching and trying this and trying that,” Chilton pointed out. “And the next thing you know, you’ve got three or four things out in left field. I got to reset everything and these cars are pretty good with the standard setup.”

And according to Chilton, there is one vital element to success when it comes to competing for race wins. This element, which he is working to improve upon, takes place before the feature even starts. And sometimes a bit of luck can help such as a Tazewell when the front row drivers were penalized for jumping the start of a heat race which he went on to win.

“The main thing, which I’ve always known this, is to lay down good qualifying laps,” the driver declared. “That made a big difference at Ponderosa. At Tazewell we didn’t really qualify that good but we got a gift in the heat race by being put in the front row which put us starting the feature on the front row. When you start these races, it makes a big difference. It’s hard to win from twelfth, or even sixth or seventh, it’s hard to win.”

With the competition level being what it is, particularly at the higher paying races, everything has to go well right from the very beginning of the night. 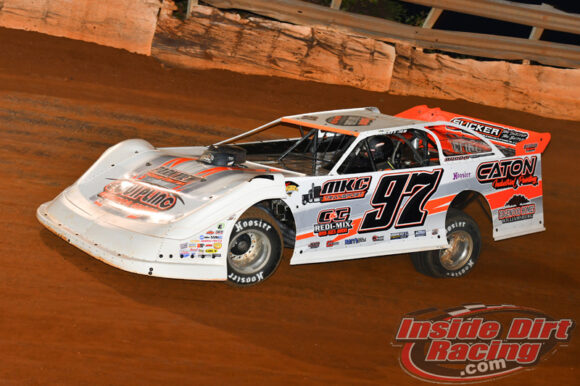 “It’s a little bit of all of it,” Chilton said when asked if any one element plays a greater role than others when setting a car up to qualify. “In qualifying now, the last couple we’ve been to have been pretty hooked up. I mean, you can’t leave anything out there. I’m bad about thinking I don’t want to tear a bunch of stuff up and I leave a little bit out there qualifying then it buries us. You’ve got to go for it all in qualifying and that’s not ever really been my forte but we’ve gotten a little better here lately.”

Chilton qualified 12th of 23 cars in Group B during Thursday night’s Lucas Oil Late Model Dirt Series program at Florence Speedway. He went on to miss out on the feature race.

The North-South 100 using a system of passing points during heat races to set its feature lineup.