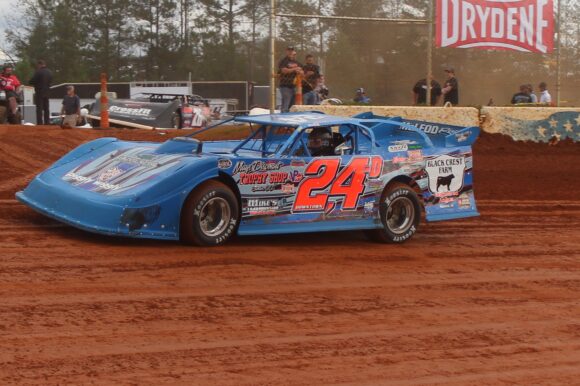 The Xtreme DIRTcar Series took to the track on Saturday afternoon at Lavonia Speedway in a race shown live by DirtVision.com. At the end of the day, it was first time winner Michael Brown who grabbed the checkered flag and was crowned at the victor in the third series race of the winter. The Lancaster, SC driver earned $5,000 for his efforts.

The fast qualifier among the 22 cars signed in for competition was 17-year-old Garrett Smith as he toured the 3/8 mile clay oval in 15.715 seconds to beat out Chris Madden, Adam Yarbrough, Michael Brown, Kenny Collins and Matthew Nance.

Chris Madden beat out Kenny Collins, Jay Sessoms, Tim Vance and John Price in the second preliminary of the afternoon.

At the start of the 40-lap feature it was Smith who went to the early lead with Brown, Collins, Madden and Wilson trailing. Smith began to pull away by the fourth circuit as the remainder of the top-5 battled for position.

Brown began to close on the leader on lap 8 as the lead duo worked through slower traffic. Soon, Collins joined the battle at the front of the field just before a caution flag waved on lap 15 for the slowing car of Tim Vance.

After having to go to a backup car following a mishap in his heat race, Xtreme DIRTcar Series points leader Kyle Strickler banged into the turn four wall before a lap had been scored on the lap 15 restart. Although he had climbed to the 11th position after starting at the tail of the field, the day was over for the driver of the No. 8 car.

At lap 18, Madden and Wilson fought over the fourth positions with Madden ultimately claiming the spot. Shortly thereafter, Brown closed in quickly on Smith and made the pass for the lead of the race on lap 19. That move was followed by Collins who took the runner-up spot away from the fading Smith.

As the laps clicked away, Brown began to pull away from the pack and looked to have the race in hand until Smith slowed with a flat tire on lap 38.

On the final restart of the day, no serious challenge was forthcoming as Brown outran the field to the checkered flag to claim his first series victory.

In victory lane, Brown told DirtVision.com announcer Rick Eshelman that he wasn’t sure before the race started if he could pick up the win or not.

“I really didn’t know,” Brown said. “I just know that we’ve put a lot of work into this deal and Mark McLeod and Sandy McLeod have put a lot of money behind me. It feels great. I’ve got a lot of great people behind me.”