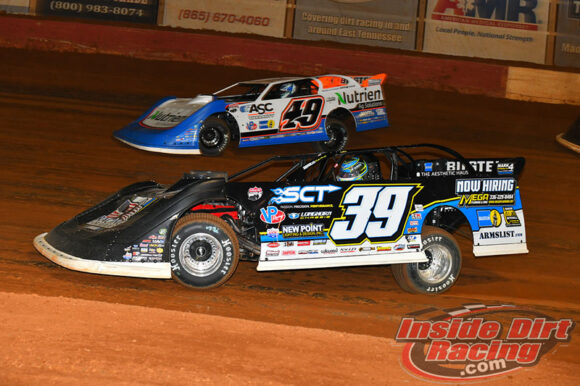 Tim McCreadie did something that has not been done often in 2022. He passed Jonathan Davenport late in the XR Super Series sanctioned Kokomo Dirt Nationals finale at the Kokomo Speedway. The No, 39 Paylor Motorsports machine then proved to be unstoppable in traffic on its way to its driver’s second series victory.

The Longhorn Chassis driver from Watertown, NY earned $40,000 for the victory on the quarter-mile track located in Kokomo, Indiana in a race shown live by raceXR.plus.

A total of 39 cars were signed in for competition

Feature Re-cap: Bobby Pierce was slated to lineup 7th but was unable to start the race.

At the start of the 60-lap feature it was Davenport who went to the early lead with Overton, McCreadie, Thornton and Shirley in his tire tracks. A lap 2 caution for debris slowed the early pace. When the race went back to green flag conditions Davenport continued to lead with Overton staying right on his rear spoiler as those two cars built an advantage over McCreadie, Thornton and Shirley.

Overton continued to harass Davenport as the lap count passed by 10. However, the No. 49 car would ultimately begin stretching his lead out to more than two seconds by lap 15 as Overton fell back into the clutches of McCreadie.

A lap 18 caution for Wilson regrouped the field and erased Davenport’s lead. On the ensuing restart, Davenport held the lead while McCreadie worked his way by Overton for second. Further back, Shirley fought to keep Dennis Erb Jr. behind him as they battled for the fifth position.

Thornton took third from Overton on lap 25 as Shirley crept in on that battle.

McCreadie moved onto the tail of Davenport’s car as the leaders worked through slower traffic on lap 35. Thornton also closed into join the contest for the race lead. With 15 circuits remaining, the top-3 of Davenport, McCreadie and Thornton ran in tight formation. McCreadie would take the lead on lap 47 employing a low line around the track.

Heavy traffic kept the leaders close with 10 laps remaining. Meanwhile, a fast rising Madden moved around Thornton to take third. But in the end, it was McCreadie who would prove masterful in traffic to secure the victory.

“Leading that many laps, it’s just hard to know where to be,” McCreadie of Davenport’s situation in slower traffic. “I figured if I poked him once up there I could get him off the bottom. He started to move up around lapped cars and I thought maybe it was my chance. Hats off to this Paylor Motorsports team. It’s been no secret that this hasn’t been easy this year. We’ve got some wins but far too many times we’re sixth. This chassis here is a brand new chassis, probably two weeks, it was our fourth run on it.”