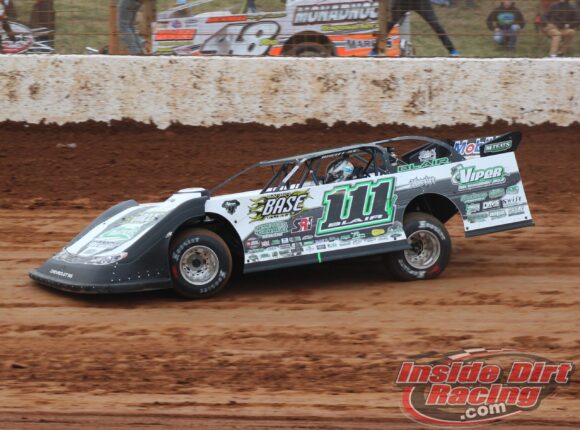 The Centerville, PA driver took what he learned Friday and used it to his advantage, leading the final 43 laps to win the second annual Rock Gault Memorial Saturday at Cherokee.

A few late-race restarts tested Blair again, as Ross Bailes challenged the Rookie of the Year contender for the win. Blair aced the final two restarts, keeping Bailes at bay for the $20,000 prize.

He had mixed emotions about the multiple yellow flags at the end.

“The first [caution] I was actually really happy about because it got you out of lap traffic and into clean air,” Blair said. “I’m very inexperienced in this type of racing, so being in clean air without those lap cars were a big deal.

“The next couple that came out at the end I didn’t want to see. I just can’t believe we just won this race.”

While Blair led most of the race, a break fell his way on Lap 18 while running second to reigning Series champion Brandon Sheppard. The New Berlin, IL driver, pulled away from the field but spun after contact while trying to pass Brent Larson in Turn 4.

Blair seized his opportunity from that point forward but stated he didn’t have anything for Sheppard.

“I think [Sheppard] probably had us covered there,” Blair said. “We had some good fortune on our side there. I hate it for them guys.”

Sheppard rebounded to finish 12th. The “Rocket Shepp” looked destined for his 78th career win before the contact dashed his hopes for victory.

“The stars were aligned before we got to lap traffic,” Sheppard said. “The lap car in front of me got tight and started to push on the bottom, and I was kind of in the middle rolling around lap cars. When he started to push, I seen it, and I started to check up a little bit, and then he hit the little hole in Turns 3 and 4. I guess he jammed on his brakes, parked right in front of me, and I had nowhere to go.”

Ross Bailes settled for second, missing out on the $20,000 payday in front of his home fans. However, while the Clover, SC driver, didn’t find Victory Lane, he did enough to win the Drydene Xtreme DIRTcar Series championship—scoring $15,000.

“We came here wanting to win the race, but obviously, the points deal was in the back of our minds,” Bailes said. I felt like [Blair’s] car either went away, or mine came to at the end. I wish it would’ve stayed green, and I could’ve pressured him a little more and see what would happen.”

From Fayetteville, NC, Daulton Wilson finished third, his third consecutive World of Outlaws top-five at Cherokee. He continues to knock on the door for his first win on a national tour and is confident it’ll happen soon.

“We’re up and coming, but we’ll keep our head down and keep working,” Wilson said. “If we keep running top three with this crowd, the wins will come.”

Max Blair took the lessons he learned from his heartbreak Friday at Cherokee Speedway and turned it into glory to end the weekend. The more experience he gets, the more of a factor he could be in determining this year’s World of Outlaws CASE Late Models Series Champion.

UP NEXT: The Most Powerful Late Models on the Planet travel to the Land of Lincoln for the Illini 100 at Farmer City Raceway April 1-2. For Tickets: CLICK HERE.

If you can’t make it to the track, you can watch all the action live on DIRTVision – either online or through the DIRTVision App.