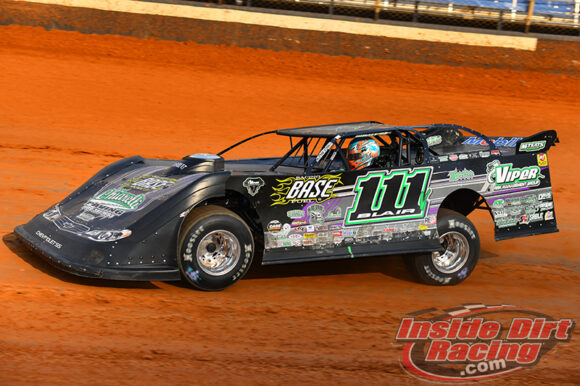 Max Blair had been two-for-two in Late Model features at the Bloomsburg Fair Raceway. On Thursday night the home state driver made it three-for-three as he claimed the first World of Outlaws CASE Construction Late Model Series race ever at this track. It was the first of a three-race weekend for the national touring series in the ‘Keystone State’.

The Rocket Chassis driver from Centerville, Pennsylvania earned $10,000 for his efforts in a race held on the half-mile oval located in Bloomsburg, Pennsylvania and shown live by DirtVision.com.

A total of 32 cars were signed in for competition.

Feature Re-cap: When the 40-lap feature took the green flag it was Blair who bolted to the lead with Rine, Gustin, Satterlee and Frank trailing. Blair worked to pull away until the fourth-running car of Satterlee spun to bring out a yellow flag on lap 4.

Erb passed both Gundaker and Frank to take the fourth position on lap 5 just before a caution flag was displayed for a mishap involving Stone and Lupfer. On the restart, Gustin assumed the second position while Erb came up to third.

Erb moved in and took up the fight for second with Gustin until another caution would slow the action on lap 8 when Rine slammed the turn one wall. Richards also suffered body damage to the right rear of his machine at the same time.

Erb charged to the runner-up position on the lap 8 restart and set off after the leading car of Blair. However, Blair began to slip away from his pursuers under green flag conditions. Satterlee recovered from his earlier spin by moving into sixth just before the halfway mark. Soon thereafter, the No. 22 broke into the top-5 passing Gundaker.

A lap 21 caution again bunched the field when Montgomery tagged the outside wall. Just after the restart, Satterlee spun after hitting a rut in turn three and had his car tagged by Briggs and Gundaker. By this time, half of the field had been eliminated by attrition and accidents.

Blair continued to lead after the lap 21 restart ahead of Erb, Gustin, Richards and English. Meanwhile, Erb was keeping Blair in his sights until a yellow flag came out with 15 laps to go when Gundaker slowed.

Blair pulled away as the race stayed green until lap 35 when a yellow for the slowing third-place car of Gustin was displayed. At that point, Blair led Erb, Richards, English and Clanton.

Blair maintained his advantage over the final five circuits to claim his second World of Outlaws feature of the season.

“Oh yeah, for sure,” Blair replied when asked by DirtVision.com reporter Hannah Newhouse if his previous Bloomsburg experience benefitted his efforts. “These were very different track conditions tonight than what we had last year but being familiar with this place and nobody else really was was big. That’s the same reason the 2J(Rine) was good. It was a lot of fun. We’re three-for-three at Bloomsburg and I’m pretty excited to come back.”