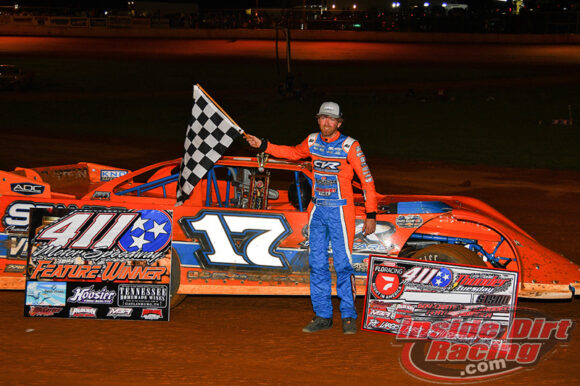 It has been a stellar racing season for Matt Henderson. The CVR Race Cars driver has racked up a total of 15 feature wins over the course of 2021 with some of those victories offering highly lucrative payouts. Indeed, the Loudon, Tennessee pilot and his team have been a force to reckon with in the 604 Crate Late Model division not only in his home state but across the southeastern region.

The driver of the No. 17 machine is quick to attribute his success to those around him. In particular, the veteran of almost two decades of racing points to CVR boss Chip Vineyard as being instrumental during this recent run of good fortune.

“I just got hooked up with the right people, Chip Vineyard and CVR Race Cars driving their house car,” Henderson explained in an interview with InsideDirtRacing.com. “I’ve got better stuff than I’ve ever been able to drive. Chip monitors the race track and he’ll walk up there 100 times and then comes back and adjusts the race car with exactly what it needs at the right time. As a driver who doesn’t ever get that because every time I had raced it was with buddies volunteering who don’t do this as a job that’s very helpful. This is his job to make this stuff go fast and that just makes a huge difference. That’s been the key for us.”

Henderson’s wins have been spread across various sanctioning bodies as he has triumphed in races officiated by Crate Racin’ USA, the American All-Star Series, and the United Championship Racing Series as well as several unsanctioned events.

“We’ve won with all the three touring series that do big crate races,” the driver pointed out. “We’ve had a remarkable year, definitely the banner year of my career, and even for the house car. It’s the banner year for them too. It’s been really good.”

Two of this season’s victories paid in the five-digit range as Henderson won the $10,037 unsanctioned Dylan Kennedy Memorial for the Limited Late Model division at Wartburg(TN) Speedway and the $20,000 World Championship at Cochran(GA) Motor Speedway administered by Crate Racin’ USA. The CVR crew will head to All-Tech Raceway in Ellisville, Florida later this month to contest a $26,000-to-win event also sanctioned by Crate Racin’ USA.

Henderson handles the driving chores for his team but he is quick label Vineyard as the setup mastermind. The relationship between the two men has been one fostered over their time working together.

“Neither one of us thought we would work well together like we do just because we’re so stuck in our own ways,” Henderson stated. “But when it comes to this race car, I don’t even have an opinion. I tell him what I feel and whatever he wants to do to correct that or however he wants to go about it, that’s what we do because he doesn’t steer me wrong, but if he does we own it, we learn from it, and we move on. The relationship we’ve built, we’ve been working together for over a year because I helped them when they had the house car running last year when I helped them and their driver at the time.” 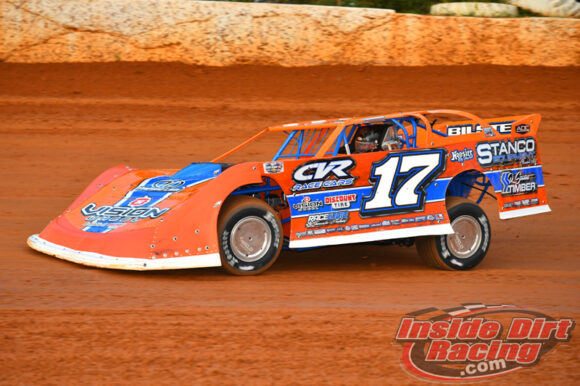 That year of working together before he became the permanent driver established the partnership that has proven to be beneficial for all invovled.

“We got the language down and how everybody needs to work together then,” he explained. “And this year we were looking for a driver for the house car and I was just helping them look. He(Vineyard) asked if I had a seat and said we would just put my seat in it and I could drive it. That’s how it came about. It wasn’t no elaborate plan or anything and it’s worked out good for both of us.”

Freed from the responsibilities of having to setup and maintain the race car, Henderson is afforded more time focus on the driving aspect of his job. And that has been a major contributing factor in the wins the team has earned so far this year.

“I have more time to study the sport,” he declared. “I’m watching videos all the time because this is what I do now. I work with Chip through the week and that gives me the time to try to be prepared as a driver for everywhere we go. That’s helped a ton. I’m not trying to work and do different stuff in a different industry. I’m in the racing industry and it gives me time to prepare. When we go to these big races and I’m prepared like that, I learn about my car and about my driving all through the weekend instead of worrying about what I’m doing outside the car.”

Most of all, Henderson lauds Vineyard’s willingness to try new things. As a matter of fact, a new idea by the car builder led to a victory on Tuesday night at 411 Motor Speedway in the 604 Late Model portion of the FloRacing Night in America event.

“People would not believe some of the things we try and do. He’s a mad scientist. Some of the things he comes up with, tonight we changed something at 3am. He woke up at 3am and was back in the shop working on it. When I walked in, our whole game plan had changed for the night. We’re always trying to work because, in the house car program, we have to try to keep our customers up to date. Racing evolves every week and it’s unlike it’s ever been. I’ve been doing it for 19 years now and it’s never been like it is now, it changes every day of the week. We’re constantly trying to evolve and keep our customers updated so we’re always trying something to further our program.”