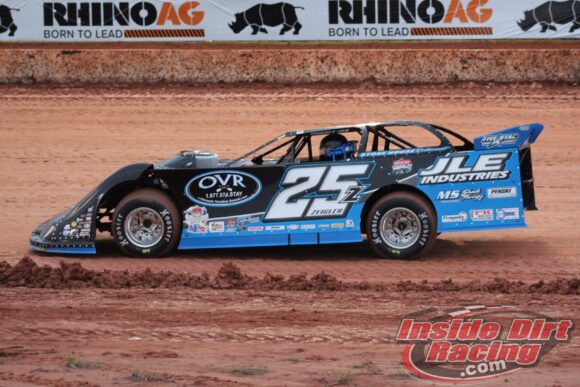 It was night five on Friday for the Wrisco Winternationals for the Lucas Oil Late Model Dirt Series at East Bay Raceway Park. At the end of this night it would be Mason Zeigler who would use a last lap pass to come away from the Tampa area facility with the winner’s trophy and a check valued at $12,000 for the second time in his career.

Tyler Erb proved to be the fastest in Group A time-trials by turning a lap in 14.504 seconds around the third-mile track. That effort beat out Tanner English, Jonathan Davenport, Mason Zeigler, Charles Powell and Tyler Bruening.

Tyler Erb earned the pole position for the feature by winning out in the first heat over Mason Zeigler and Shanon Buckingham while Kyle Bronson earned the victory in the second preliminary ahead of Devin Moran and Mike Marlar.

Jonathan Davenport was the victor in heat three over Brian Birkhofer and Jadon Frame.

Brandon Sheppard earned a starting position on the outside of the front row for the main event by beating Billy Moyer, Jr. and Hudson O’Neal in the fourth preliminary race just before Jimmy Owens outran Josh Richards and Dennis Erb, Jr. in the fifth heat.

Tanner English, Billy Moyer, Sr. and Colton Flinner won the three B-main races used to set the remainder of the starting lineup for the main event.

At the start of the 50-lap feature it was Sheppard who immediately went to the front ahead of Erb, Owens, Bronson and McCreadie. Bronson charged by Owens for third on the second circuit. McCreadie followed Bronson through to take fourth from Owens.

A lap 8 restart allowed Bronson to grab second from Sheppard even after the two drivers who had contact with each other earlier in the week swapped slide jobs for two laps. Further back, Davenport moved forward by passing Owens for fourth.

Erb, Davenport and Richards traded the third through fifth positions multiple times between laps 14 and 17 until Richards broke to bring out a caution.

During the middle stretches of the race the top-5 of Bronson, Sheppard, Erb, Zeigler and McCreadie held station while Owens, Moyer, Jr., Clanton and O’Neal staged a great fight for the positions just outside the top-5.

A late race caution set up an all out race for the win with nine laps remaining.

Bronson and Sheppard battle hard for the lead as Zeigler closed in from third. On lap 45, Zeigler moved by Sheppard for the runner-up spot and then set his sights on the race leader. Over the final two laps Bronson and Zeigler traded sliders until Zeigler shot to the lead in turns three and four on the final lap.

Bronson made a bid back to the inside as the cars roared toward the checkered flag with Zeigler edging Bronson at the line by two feet.