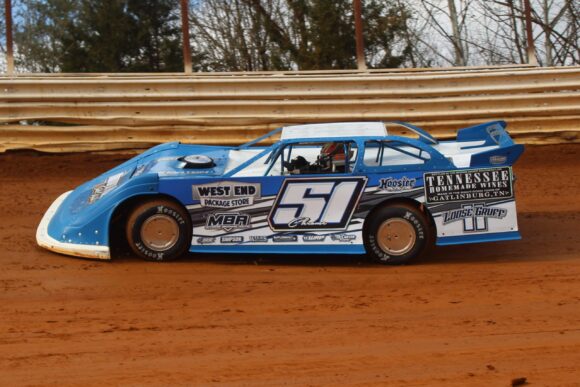 Mack McCarter grabbed the win when Welshan and Sise tangled

The Crate Late Model division took part in the “Grinch at the Gap” event and the race played out to a thrilling ending. Mack McCarter took the win after the top-2 drivers ahead of him engaged in a fierce battle that opened the door to his eventual win. The Gatlinburg, TN racer earned $1,500 for his efforts.

It was the third win in as many tries for McCarter since a switch to a new CVR Race Car. He swept last weekend’s Crate Late Model features at 411 Motor Speedway.

Welshan bolted to the lead at the start of the 30-lap feature with Sise, McCarter, Miller, and Guinn trailing. Guinn went on the charge as he took fourth from Miller on the second circuit.

Welshan began to work through slower traffic until a caution waved for a mishap involving Braden Mitchell and Tommy Eastridge on lap 7. When the race returned to green, McCarter and Sise fought for second while Guinn and Miller contested the fourth spot.

In the race’s middle stages the top-5 of Welshan, McCarter, Sise, Guinn and Miller pulled away from the pack. But a lap 26 caution set up a final run to the finish that would prove to be thrilling.

On the lap 26 restart, Sise used a slide job to get by Welshan as they raced through turn two. The two continued to battle down the backstretch and into turn three. More contact between the two caused both to get out of shape. In the meantime, McCarter took to the high side and passed by both.

On the final lap, Welshan attempted a slide job to get back around Sise. Again, contact ensued on the backstretch into turn three. After contact, Welshan spun while Sise continued on after Guinn passed by both.

McCarter sailed under the checkered flag for the win while Welshan went to the scales to confront Sise. After officials intervened, both sides were sent back to their haulers.

.@JasonWelshan not happy with Zach Sise after a last lap run-in between the two @TheGap_VolSpdwy in the Crate Late Model feature. They were racing for second behind Mack McCarter. Write-up coming later this evening on https://t.co/VycyFiE1i6 pic.twitter.com/BXlO997xFd