Mack McCarter doubles up in 604 Late Model feature at 411 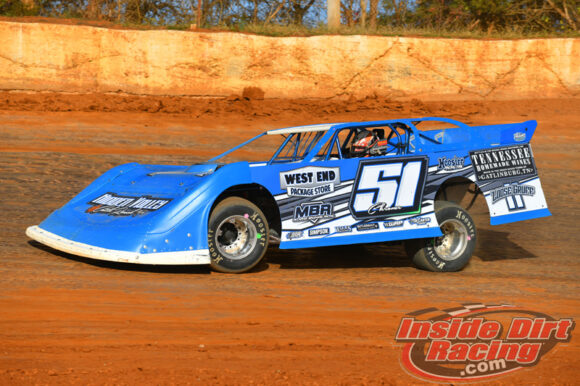 Mack McCarter scored his second win of the weekend

The 604 Crate Late Model class hit the track for the second time during the Leftover weekend at 411 Motor Speedway on Saturday. And for the second night in a row, it was Mack McCarter who claimed the win in the division. The Gatlinburg, TN driver earned $1,500 for the victory.

The top-12 from qualifying were locked into the feature.

Greg Martin won the first heat race of the day by beating out Tyler Hoy, Dalton Brown and Zach Shannon.

Shannon Emery was victorious in the second preliminary ahead of Sam Bryant, Christian Hanger and Connor Meade.

At the start of the 30-lap feature, McCarter went to the early lead with Henry, Beets, Cardwell and Williams in his tire tracks. Cardwell moved around Beets to claim third on the second lap.

A caution for debris on the track slowed the action on lap 5 but it did not stall McCarter’s domination as he immediately charged back to the lead when the green flag waved again. By the seventh lap, the top-5 of McCarter, Henry, Cardwell, Beets and Williams began separating themselves from the rest of the pack.

Williams and Collins then began to do battle for the fifth position on lap 10 with Collins eventually taking the spot on lap 13 just before a yellow flag waved when Williams slowed on the track.

Just after the restart, Sise moved around Collins to enter the top-5.

A lap 19 battle between Henry and Cardwell resulted in those two drivers exchanging positions multiple times. But in the end, it was McCarter who would cruise under the checkered flag to earn the win.