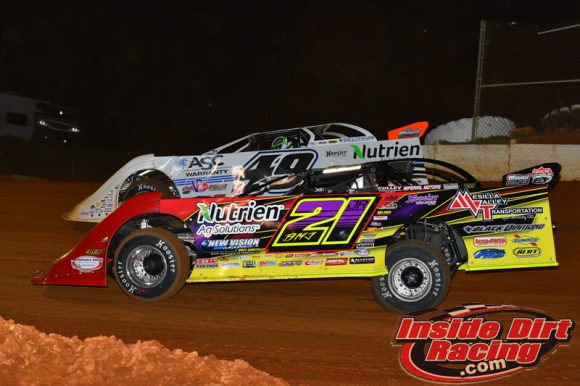 Billy Moyer, Jr.(21) and Jonathan Davenport will be among the Lucas Oil drivers racing this weekend

With the Dirt Late Model Dream now in the rear view mirror, the national tours will be getting back into action over the next couple of weeks. And getting back into action could prove to be somewhat of an accomplishment for the Lucas Oil Late Model Dirt Series. This is a series that has seen 13 of its early season races either rescheduled or cancelled due to very uncooperative weather. But with a more promising forecast for the upcoming weekend, it appears as if there is a better than average chance of getting in three races in three different states over the course of three nights.

The LOLMDS is set for a $10,000-to-win Thursday night show at the Fayetteville (NC) Motor Speedway followed the next night by a $12,000-to-win affair at the Cherokee Speedway in Gaffney, SC before concluding on Saturday night as drivers contest a feature worth $15,000 to the winner at the Smoky Mountain Speedway in Maryville, TN.

Currently in the Lucas Oil Late Model Dirt Series two-time and defending champion Jonathan Davenport holds a commanding lead in the series standings over Earl Pearson, Jr., Tyler Erb, Devin Moran and Josh Richards. Davenport has built that advantage on the strength of five points-paying series wins and by the fact that his worst finish in a points-paying series race has been a fourth. All other LOLMDS results have placed the driver of the No. 49 Longhorn Chassis on the podium.

Something that might offer encouragement to Davenport’s pursuers is that he has struggled in these three races over the past three seasons. Considering that there have been cancellations due to weather in each of these locales, the best finish for the Blairsville, GA native has only been a fifth at Cherokee Speedway in 2016. He has recorded finishes outside the top-10 in each of the other LOLMDS races contested on these three tracks over the past three years.

One driver who has had success during that same time span, particularly at Cherokee Speedway, has been Scott Bloomquist. The driver known as ‘Black Sunshine’ has won two of the last three LOLMDS events at the Gaffney, SC facility. 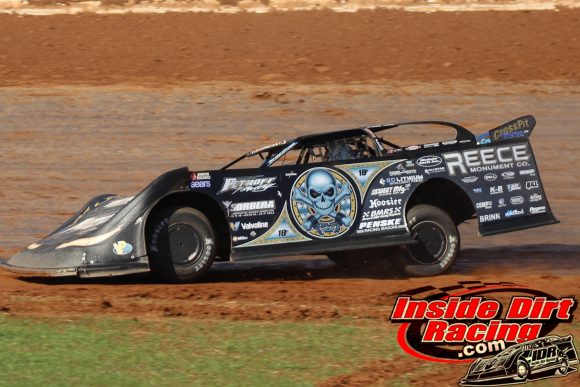 Scott Bloomquist is expected to race this weekend

Word from the @SBR_TeamZero Twitter account is that Bloomquist, who was injured in a March motorcycle accident, plans to race at Fayetteville and Cherokee this weekend.

However, being a Lucas Oil Late Model Dirt Series regular does not appear to be a necessity in terms of finding success in these three events. Chris Ferguson was the winner of the 2017 Fayettville feature while Brandon Overton took the top spot at Cherokee that same year. Dale McDowell was the victor at Smoky Mountain back in 2016.

No matter who the winners might prove to be, it will simply be a good thing to see the Lucas Oil Late Model Dirt Series back in action without interruption from the weather, if that indeed does prove to be the case.