The Modified and Crate Late Model divisions returned to 411 Motor Speedway for their part of the Saturday portion of the 10th annual Hangover event. 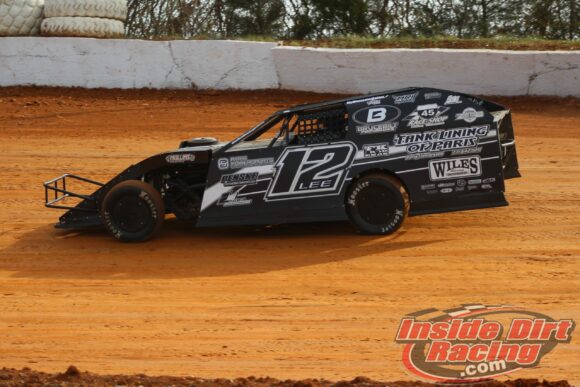 Todd Riley and Logan Kirkman won the two B-main races used to set the remainder of the starting lineup for the main event.

At the start of the 25-lap feature it was Lee who went to the early lead followed by Hamby, Dyer, Nicely and Harlow. Nicely was the first to move forward as he passed by Dyer to take the third spot on the third lap of the race. He then immediately grabbed the runner-up position by getting around Hamby.

Dyer used a slide job pass to take third from Hamby on lap 5 while Harlow got by Hamby for fourth on the seventh lap.

During the race’s middle stages, Harlow and Dyer staged a fierce fight for third as Lee and Nicely separated themselves from that battle. Miller eventually joined Harlow and Dyer as those three machines jockeyed for the positions at the back of the top-5.

A lap 22 spin by Dyer as he attempted to pass Harlow eliminated the fourth running car. But in the end, no one could mount a serious challenge to Lee’s supremacy as he sailed under the checkered flag to capture the victory. 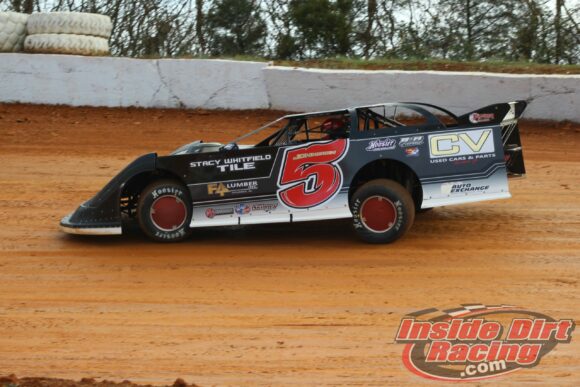 The Crate Late Models battled for a purse of $1,500 in the feature. In the end Ronnie Johnson took the top prize back home to Chattanooga.

When the green flag waved over the 25-lap feature it was Johnson who grabbed the early lead ahead of Hickman, Miller, Marsh and Beets. Marsh took third away from Miller on the second lap but Miller would fight back two laps later. Ultimately, however, Marsh kept third while Miller settled in fourth.

Johnson encountered slower traffic on lap 8 which allowed Hickman to close right onto the leader’s rear spoiler. Just behind the leading duo, Marsh, Miller and Beets fought over the third position.

A significant moment in the race occurred during a lap 14 caution period when the second running car of Hickman pulled off the track and out of the race.

On the first attempt at a restart, Beets moved to take third from Marsh but contact between the two cars sent Marsh for a spin. Marsh was returned to his position while Beets was sent to the tail of the field by track officials.

Johnson controlled the race over the closing laps as Jesse Lowe made a charge through the pack that would carry him all the way to second.