Longhorn’s domination of Wild West Shootout has been absolute 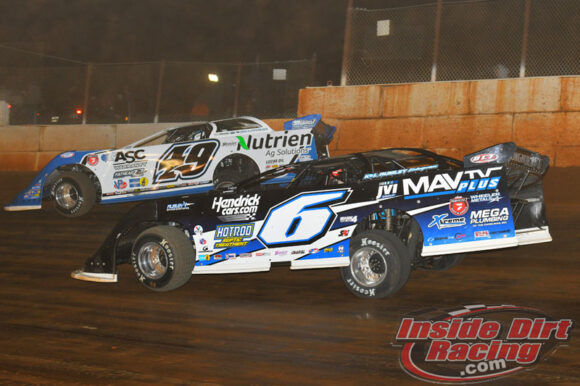 To say that Longhorn Chassis has completely dominated the first three nights of the Wild West Shootout at New Mexico’s Vado Speedway Park would be putting it mildly. Dirt Late Model racing’s most prolific money earner in 2022, Jonathan Davenport, has swept the three feature races held so far to the tune of $10,000 each for that chassis builder. But a deeper look into the statistics reveals even more than might initially meet the eye.

Not only has a Longhorn driver taken all three checkered flags but there is much more to the story. The North Carolina-based manufacturer has set fast time in every qualifying group on each of the three nights. Group A and B fast timers on Saturday night were Mike Marlar and Bobby Pierce then on Sunday night it was Kyle Larson and Johnny Scott while Pierce and Davenport led their respective groups on Wednesday.

Further, that same chassis brand has dominated the preliminary races staged so far. Out of a total of 12 heat races contested in the desert Southwest through Wednesday night, Longhorn has won nine of them.

A total of 110 feature laps have been counted so far in the three main events with Longhorn drivers leading every single circuit. And at the end of those races, only one podium finishing position has been taken by a driver in another brand(Ricky Weiss was 3rd on Saturday in a Sniper).

Weiss’s Sniper Chassis has been a solid contender as the Canadian driver has notched three top-5 finishes to date. Garrett Alberson in a Black Diamond Race Car has won two heat races on his way to compiling three top-10 results. Morgan Bagley scored the only heat race win so far for Rocket Chassis on Wednesday evening.

Brandon Sheppard, who had previously driven the Rocket Chassis cars, just switched to Longhorns with his Sheppard Riggs Racing team at the start of this season. He has logged finishes of second, fourth, and third after three events and has scored two heat race wins.

“My car was really good,” the 2021 NASCAR Cup Series champion declared from the podium. “A big thank you to Kevin Rumley and Longhorn and everybody who helps out to try and get me comfortable. We’ve changed a lot of stuff the last few times I’ve been in the car. I feel like maybe we’re getting closer on something.”

Granted, of the drivers and teams who would have been considered most likely to do well prior to the running of any of the Wild West Shootout races, Longhorn pilots very much outnumbered the competition. But still, their domination has been absolute.

The racing action is set to resume this weekend with $10,000-to-win features on Friday and Saturday and a $25,000-to-win affair set to close out the mini-series on Sunday. Those races will be streamed live by FloRacing.com.