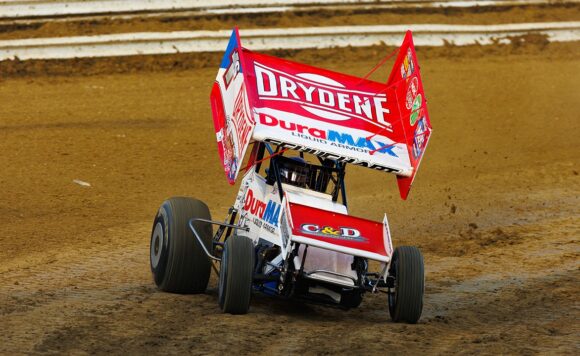 Already ahead of where he and the Shark Racing team were last year in preparation for the new season, Schuchart has his eyes on a second DIRTcar Nationals Big Gator Championship in February to help kick off a World of Outlaws championship run.

“Last year we didn’t really know what was going on with RelaDyne and Drydene until pretty late and this year, in October, we already knew they were on board again so we could kind of be more prepared,” Schuchart said. “We could get stuff ahead of time to be ready to go this winter.

“We got it done last year, but, like, January was a mess. We were running around like chickens with our heads cut off. This year, it is a little more relaxed. We can do things how they should be done. A little more organized.”

He’s hoping that leads to the success they had at Volusia Speedway Park in 2021 when he won his first Big Gator Championship and claimed his third DIRTcar Nationals Feature win (two with the World of Outlaws and one with the All Star Circuit of Champions).

Along with that being his first time hoisting the life-size championship gator trophy, it was also a first for several members on his Shark Racing team. A true testament to their hard work and consistency throughout the event.

“Just the consistency of the week and being in the points lead made us feel good about what we had going on,” Schuchart said. “Obviously, it is early in the season and is a few races at one track, but it makes you feel good.

“It was a first for me to win the Big Gator and people on my team. Bill Klingbeil, my stepdad, he does all of our PR stuff, he’s been in this sport a long time. He worked for Donny (Schatz, the 10-time World of Outlaws champion), Dale Blaney. A lot of big teams like [Tony Stewart Racing] and he never won the Big Gator before. For him to work for those teams and never win that and that was able to be a first for him, I thought that was pretty special, especially with the level of competition he worked with in the past.”

Schuchart finished seventh, 25th and ninth during the three days of DIRTcar Nationals last year. The 25th-place finished was a DNF due to a mechanical problem. It was the first of multiple DNFs that plagued him and his team throughout the year, and one of the reasons they fell 436 points behind Sweet at the end of the season with them both having five wins, Schuchart said.

By being ahead of the game in preparation, having confidence in their parts, having the support they need and a focus on eliminating DNFs this year, Schuchart said he and his Drydene/DuraMax #1s team believe they can be title contenders.

“I want to race for a championship,” Schuchart said. “I believe we can do that. [Brad Sweet] had zero DNFs, while we had eight or nine. We just can’t do that. Some of it is a learning experience. Some of it is financial. Some of it is COVID left over parts you can’t get. 2020 was our best year (with seven wins and finishing second in points), but obviously all those parts were bought the year before and prepared the year before. Since then, we’ve had to change around some of our program for different parts that we might not have felt as confident in. I feel like that has caused us some issues in the last year.

“Hopefully we’ve figured them out. We feel like we have. There’re always things you’re going to learn along the way. But I feel really good about the quality of our race cars, the parts that are in them and the people we have working on them, I feel like they do a great job. We definitely have the capabilities of achieving those goals.”

Being a professional race car driver and a World of Outlaws champion is something the Hanover, PA driver has dreamed about since a kid, watching his grandfather, Bobby Allen, live the life of an Outlaw. To him, it’s the ultimate testament of being the ultimate Sprint Car driver.

“The highest level of Sprint Cars to me is always the World of Outlaws, it always has been,” Schuchart said. “It’s where the best drivers, the best mechanics have always been, and I think still continue to be there. You might have guys that can show up at these big events and show up at different parts of the country and be fast, but you take those same cars and let them run with the World of Outlaws full-time, they’ll be seventh, eighth, ninth-place cars.

“The World of Outlaws is the toughest level of competition that there is. Especially when you run with them 80 times. So, to win an Outlaw championship, to say that you’re the best in the world is my goal. That would be pretty special to myself and my team.”

To watch Schuchart battle for another Big Gator Championship during DIRTcar Nationals at Volusia Speedway Park, Feb. 9-11, against the rest of the World of Outlaws stars, get your tickets HERE.

If you can’t make it to the track, you can watch all of DIRTcar Nationals live on DIRTVision.