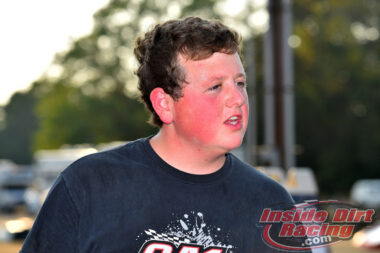 Logan Roberson has been very successful over the past few seasons racing in the Crate Late Model division around his home in Waynesboro, VA and in neighboring states. However, the 22-year old winner of dozens of feature events feels as if the time has come to move up in the ranks of the Dirt Late Model world. As a result, the No. 17 team spent this past weekend putting their new Super Late Model engine through its paces at Ponderosa Speedway in Kentucky and Tennessee’s 411 Motor Speedway.

Roberson made his first start with the World of Outlaws Late Model Series on Saturday night at 411 following an unsanctioned start the night before at Ponderosa. Previously, his experience in Super Late Model competition had been limited to a run in the Gateway Nationals in the Dome of the America’s Center in St. Louis, Mo. last December.

This latest challenge is one that is teaching the talented driver new lessons.

“We’ve really ventured out on this deal,” Roberson told InsideDirtRacing.com prior to the WoO Late Models race at 411. “I’m thankful for the opportunity that’s available to me. I’m happy to be where I am today. We’re learning and it’s a whole different learning curve to this super deal. It hit me as a surprise, you know, reality really hit me when I realized how hard these guys are to beat and how good they are at what they do. Sometimes you need that reality check to bring you back down to earth and that’s what it did to me. We’ve just got to keep digging. We were definitely not where I wanted to be last night for my first time out so hopefully we will regroup and get better. I’ve talked to a few people today and I’d be really pleased with a top-10 tonight. ”

Roberson was in fact running within the top-10 at 411 in the WoO feature until his car lost a wheel on lap 17. Earlier in the night he had qualified fourth best overall but his car was found to be too light at the scales following that run. He then raced from the tail of his heat race to a fourth place finish which earned him a 10th starting position when the cars lined up on the grid for the main event. 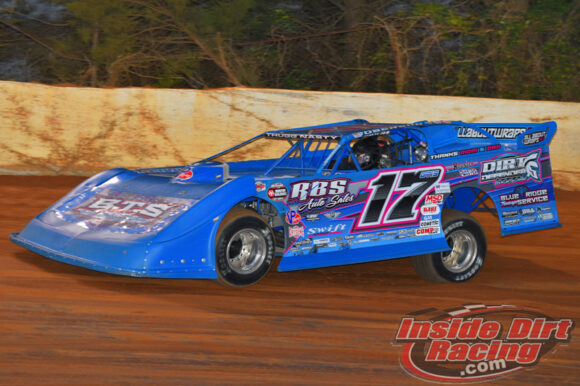 Logan Roberson made his WoO Late Models debut at 411

Roberson has won 12 Crate Late Model races this season alone and has captured more than 60 checkered flags within that division over the course of his relatively brief racing career. The rising star admits that it will take time to fully acclimate to the differing driving styles required for the two types of machines.

“Last night at the end of the feature I started catching on because with the crate stuff you’re so used to keeping it wound up, keeping it going and not binding the car up,” Roberson explained. “With these(supers), you’ve got so much power that you can pretty much power your way out of anything. It makes it hard to get used to where I’ve raced crates for so long I’m used to not binding the car up with very little motor to go with.”

Further, the talent level when racing with drivers who regularly compete with a tour such as the World of Outlaws Late Model Series affords very little margin for error. That, in turn, adds to the pressure for someone just starting out in this form of racing.

“This super stuff, every time you hit the track you’ve got to be spot on making the right calls at the right time,” he pointed out. “There are so many good guys at this deal. There might be 30 of us out here tonight and 29 of them ain’t going to make a bad call every night. You’re going to have 20 making the right call and you might have nine who are not.”

While Roberson may not be racing for big and well-financed operation, he does have a strong network of support in his corner.

“We’re a family owned and run team,” Roberson stated. “My dad and my mom work their butt off. We all work full-time jobs and we usually race two times a week. I’m lucky that I’ve got a good family behind me that allows me to do the things I want to do and they sacrificed a lot of stuff to make my racing program top notch, you know, the best it can be with our abilities. I’m really excited. We’ve got a few races coming up. It’s just me and my dad out here trying to have fun and live life.”

So what’s it like racing against the likes of Brandon Sheppard, Shane Clanton, Darrell Lanigan and Ricky Weiss?

“I look up to people like that. It’s always a pleasure when you do something like I did last year at the dome when I started beside Shannon Babb. This is a cool part of my life. You know, the people that you watch online and now I’m getting to race against them is like a dream come true. I’ve worked really hard to get where I want to be in life and hopefully we can just keep digging and I can end up where I want to be racing with them guys. We’ve got a little bit of work to do to get there.”