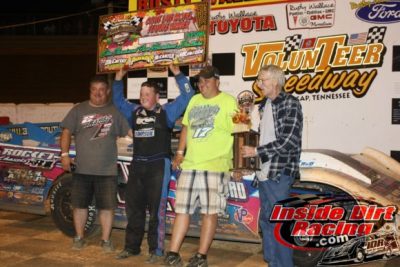 Logan Roberson likes to have fun while racing. But one thing that helps to make racing fun is the fact that the Waynesboro, VA driver wins frequently when he takes to the track in his Crate Late Model machine. And on Saturday night at Virginia Motor Speedway in the Fastrak World Championship he also had a profitable night as he pocketed $20,000 in the biggest victory of his career.

Roberson started from the front row in the feature event which actually caused the driver to feel added pressure at the start of the 40-lap event. But much of that pressure came from within.

“To start on the pole for that race was a good feeling,” Roberson recalled in an interview with InsideDirtRacing.com. “But you’ve got a lot of pressure on you to do good because you can’t do nothing but fall back from there. You want to make sure you stay on top of it. It was a lot of pressure behind you so you almost had to do good to make yourself feel good. I put it to myself that way, that I had to do good to make myself feel better.”

Roberson entered the race in Jamaica, VA with the same attitude in which he enters every race. The 21-year-old driver doesn’t go to the track thinking about top-10 finishes, he shows up looking to win.

“I go to every race thinking I can win,” he insisted. “I just keep digging and keep going. If I didn’t think I had a chance to win, I wouldn’t go.”

And win he has done. The Fastrak World Championship was Roberson’s 13th victory of the 2018 season and the 60th win of his career.

The driver of the No. 17 Rocket Chassis did not take anything for granted, however, until he saw the checkered flag wave. But once he crossed the finish line, the young driver immediately began to enjoy the moment.

“I was just worried about making it through those last five laps,” Roberson remembered. “I was just focusing, but it was awesome. As soon as I took the checkered I was grinning from ear to ear. But it took about three or four hours for it to really sink in.” 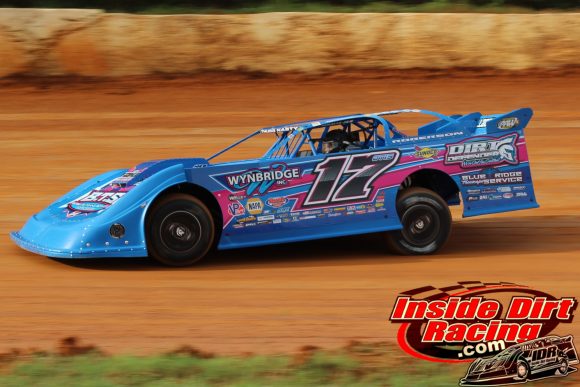 Logan Roberson in the No. 17 Rocket

Roberson and his father opted at the beginning of this year’s campaign to scale back in their number of races in order to focus on bigger shows that offered more lucrative payouts. And more importantly, the small family team wanted to make sure they were having fun participating in the sport they love. That strategy achieved the desired result this past weekend.

“This year we stepped back a little bit,” Roberson explained. “We raced almost 70 races last year. This year I talked to my dad and with the little help we’ve got crew wise we decided it would be a better idea to pick and choose our schedule to race about a 50-race schedule. We just pick and choose and don’t beat ourselves up. We don’t run for points or anything so we can focus on bigger races and still have fun doing it. I guess some people are doing it for a living now and that takes some of the fun out of it for them. We do it for fun.”

Roberson believes the big win could provide a boost to his future in the sport.

“It was definitely a turning point in my career,” he declared. “I’ve had numerous texts from people I wouldn’t even think would text me. It was an awesome deal and it couldn’t have happened at a better time and I just hope to just move on from here.”

Roberson hopes the attention garnered from the win might even bring an offer to move up to the Super Late Model division.

“I would definitely love to but crates are financially better and more feasible for us because we don’t have a big team,” the racer stated. “It’s just me and my dad who work on our stuff and it just kind of fits what we do. I would definitely be interested if I got a ride or something like that. But for now the crates are exactly what we need.”