These updates are brought to you by Smoky Mountain Speedway in Maryville, Tenn. The next event coming to SMS will be the ‘Big Daddy 75’ for the Lucas Oil Late Model Dirt Series on June 15, 2019.

Classes in action: Spring Nationals for 10,052-to-win along with some of the track’s support classes.

*Please Note: These updates will focus on the Spring Nationals race.

Weather is expected to be warm with very little chance for rain.

This race is named in honor of Scott Sexton who was a legendary racer in the east Tennessee area who passed away in 2013.

The drivers meeting is slated for 6:30pm with hot laps to follow soon afterward.

This is the final points paying race for the Spring Nationals tour.

Qualifying Results: No one will be locked in via time-trials.

Heat Race Results: There will be four heats with the top-4 transferring to the feature.

*Photo finish between Bailes and Weiss

*Overton led all the way. Blankenship pulled off on lap 4.

*Bronson, Faulkner and Arthur crashed on the initial start with all but Faulkner continuing. Chilton broke while leading on lap 9.

B-main Results: There will be one B-main with the top-5 transferring to the feature.

Both of the top points contenders (McDowell and McIntosh) will have to run the B-main.

Lap 11 caution for English stopped on track. Overton had built a big lead but Owens closed the gap in traffic. Strickler, O’Neal, Bailes, Bronson, Weiss, Buckingham, Moses, Hedgecock round out the top-10.

Caution on the restart. McDowell gets turned with others including McIntosh getting collected. Looks as if everyone will continue.

Owens passed Overton in traffic on lap 33 to take the lead. 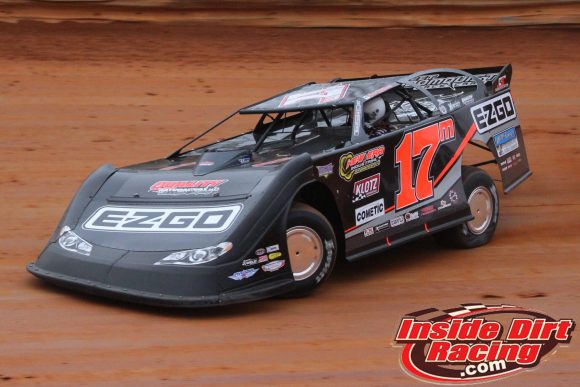