These updates are brought to you by Smoky Mountain Speedway in Maryville, Tenn. The next event coming to SMS will be the Schaeffer’s Oil Fall Nationals on August 16, 2019.

Classes in action: LOLMDS North-South 100 as well as other classes.

*Please Note: These updates will focus solely on the North-South 100.

Weather is expected to be warm and clear.

7:00- Drivers meeting about to begin.

Click the play button below to hear our pre-race interview with 2018 North-South 100 winner Ricky Weiss.

Please also consider reading: Everything has fallen into place for Chris Madden at the right time

Drivers Here: Drivers here can be found in ‘Featue Lineup’ and ‘B-main Results’.

Qualifying Results: This race uses a passing points system of heat races to set the feature lineup so there was no qualifying.

Heat Race Results: Check ‘Feature Results’ below for the starting grid as set by the passing points heat races.

B-main Results: There will be three B-mains with the top-2 from each transferring to the feature.

*Robinson got on the outside of Richards on the last lap as they races for the final transfer spot. Richards forced him very high in turn 2 then drove away to get the position. Robinson expressed his displeasure on the cool down lap.

B-main 2 Finish- 1. Hoffman, 2. McDowell … Buckingham, Heckenast, Harness*Buckingham was close to McDowell throughout but was never able to get the position.

*Overton led all the way.

Bloomquist has pulled off track before the start.

Bloomquist has returned before the start.

Blackwood clips the berm on the initial start and spins to bring out a caution.

Lap 18 caution. Owens still leads and had built up decent margin but was just getting into traffic. O’Neal, Pierce, Bloomquist, Scott, Madden, Davenport trail. Pearson and Benedum return to the track after tire changes.

Lap 39 caution. Good battle between Owens and Pierce for the lead. Owens leads Pierce. O’Neal, Madden and Scott had been in a close fight for 3-5.

Lap 61 caution. Tires becoming a major issue. Marlar and Madden got around Pierce on the last restart then contact between Madden and Marlar caused Marlar to fall back. Owens leads O’Neal, Madden, Marlar, Pierce, Weiss.

Davenport and Scott pitted for tires under the caution.

Lap 96 caution for Landrum. Madden had built a good lead. Owens, O’Neal, Moran, Dohm round out the top-5. 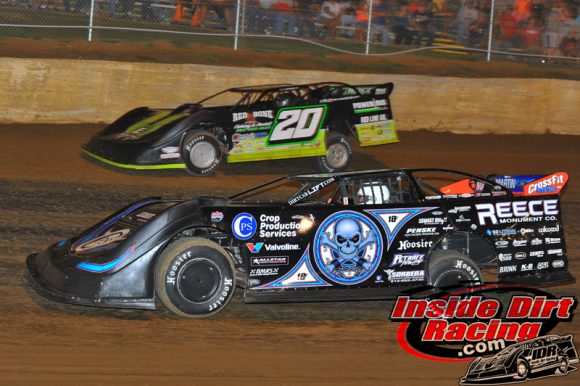