These updates are brought to you by Smoky Mountain Speedway in Maryville, Tenn. The next event coming to SMS will be the Smoky Mountain Spring Showdown Schaeffer’s Oil Spring Nationals on April 13, 2019.

Weather is expected to be cool with little to no chance for rain.

The drivers meeting is slated for 6:30 with hot laps to follow soon afterward.

This will be the largest single-race purse ever offered at North Georgia Speedway.

6:45- Drivers meeting has concluded. Hot laps for all classes to begin soon.

Qualifying Results: The field will be divided into two qualifying groups.

Heat Race Results: There will be four heat races with the top-4 from each transferring to the feature.

*Richards was turning laps faster than the pole speed. Overton dropped out on lap 3. Page, Littleton, and Jameson involved in an incident on the initial start. Jameson could not continue.

*Only four cars finished. Buckingham, Brooks, Haygood and Polston involved in an incident on the initial start. Bronson also dropped out.

*Payne won by a straightaway.

*Davenport got out to a big lead but Erb tracked him down.

B-main Results: There will be two B-mains.

Richards took the lead in turn 2 on the start then as Payne was passing him he bobbled and lost several spots.

Pileup on the restart. Owens, King and McCreadie among those with damage.

Lap 37 caution. Davenport still leads. Moran and Erb were battling for second when Moran jumped the cushion and fell back. Erb now at the tail(I believe he pitted). Hawkins now second followed by D O’Neal. 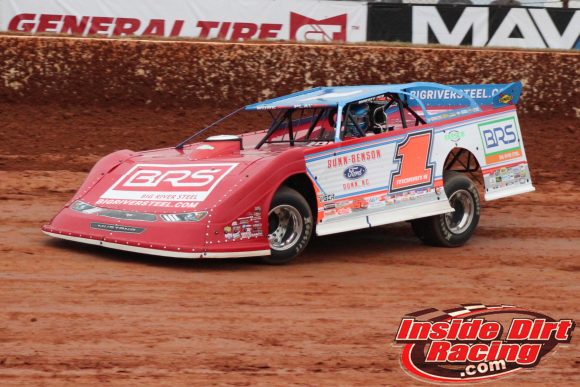