These updates are brought to you by Smoky Mountain Speedway in Maryville, Tenn. The next event coming to SMS will be the Smoky Mountain Spring Showdown Schaeffer’s Oil Spring Nationals on April 13, 2019.

Weather is expected to be cool with little to no chance for rain.

The drivers meeting is slated for 6:45 with hot laps to follow soon afterward.

This will be the first time the Lucas Oil Series has visited 411 Motor Speedway.

6:45- Drivers meeting about to begin.

7:00- Drivers meeting has concluded. Hot laps up next.

Qualifying Results: Cars will be broken into two groups for qualifying.

Heat Race Results: There will be four heat races with the top-4 from each transferring to the feature.

*Due to a power outage during qualifying the scoring system went down. The heat race lineups will not be posted but I will be posting the heat finishes.

*Bailes took the lead on the start and led all the way. Good race for third between Davenport and Chilton.

*Richards led all the way. Hill spun on lap 3 to bring out a caution.

*McDowell took the lead after a brief battle with McIntosh then led the rest of the way.

*Owens led all the way. Great battle for the final transfer spot.

B-main Results: There will be one B-main with the top-6 transferring to the feature.

Lap 25 caution for debris. Bailes leads. Owens and McIntosh exchanged second a couple of times after the last restart and now Owens has it. McDowell is fourth ahead of Richards, Davenport and King. 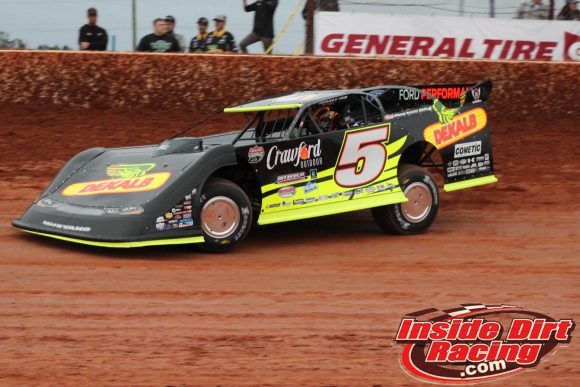 Don O’Neal will be among those competing at 411