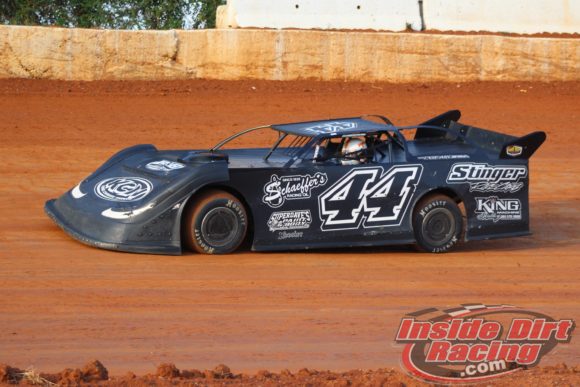 Chase King led all the way to score the win

The Schaeffer’s Oil Iron-Man Championship Late Model Series is at the 411 Motor Speedway in Seymour, Tenn. tonight to contest a $3,000-to-win feature event. Following a rain out on Friday night at Tri-County Race Track in Brasstown, NC as part of what had been scheduled as a double-header weekend for the series, Robby Moses enters the racing action at 411 as the leader in the Iron-Man Late Model Series standings ahead of Joseph Faulkner, Joey Standridge, Casey Turman and Donald McIntosh.

Chase King came away from his hometown track as the big winner. It was his first Super Late Model victory in only his second attempt.

These updates are brought to you by Smoky Mountain Speedway in Maryville, Tenn. The next event coming to SMS will be the Southern All Stars sanctioned ‘King of the Mountain Classic’.

This will be the eighth race of the 2019 season for the Iron-Man Late Models. So far this year Brian Shirley, David Seibers, Jimmy Owens, Robby Moses, Ashton Winger and Kyle Strickler have won feature races on the tour with Winger being the only driver to have scored two victories. Owens picked up $10,052 in the series only other visit to 411 back in March for the Scott Sexton Memorial.

Click on the play button below to hear our pre-race interview with Kentucky driver Dustin Linville.

A total of 14 cars made qualifying attempts.

Chase King proved to be the fastest in Group A qualifying and would start from the pole in the feature by virtue of his 14.420 second lap that bettered the times of Dustin Linville, David Crabtree, Austin Neely, Dusty Carver, Jason Melton and Mitchell Childress.

Robby Moses earned an outside front row starting spot after he led the way in Group B qualifying with a time-trials with a lap of 14.422 seconds to beat out Joseph Faulkner, Mack McCarter, Casey Turman, Bobby Giffin and Andrew Littleton.

King took the lead at the drop of the green flag for the 30-lap feature with Moses, Linville, Faulkner and Crabtree trailing. Linville briefly made an attempt to take the runner-up position in the early laps but was unable to move around Moses.

Further back, Crabtree and Neely passed by Faulkner for fourth and fifth respectively on lap 4.

As the race continued caution-free King built a relatively comfortable advantage until he began to encounter slower cars on lap 13. At that point, Moses closed onto his rear spoiler. But once the No. 44 cleared the lapped machines he set about rebuilding his lead.

However, a lap 28 caution for wall contact by the Mack McCarter car brought out a yellow flag.

Ultimately, King got the jump on the restart and held the field at bay over the final two circuits to claim his first ever Super Late Model triumph.

Click on the play button below to hear our post-race interview with feature winner Chase King.