The following is an account of a meeting that took place in 2002 involving many big names in the sport of dirt late model racing. All accounts are from memory as no notes or no recordings were taken. Any names omitted were done so for accuracy purposes or because their role in the meeting was not remembered. I hope you will enjoy this account into something that most people never knew that took place.

Dirt late model racing saw a boom in growth in the late 1990’s and early 2000’s. Despite that growth, the sport suffered from numerous growing pains that promoted a little known meeting in 2002 among the biggest names of the sport.

Dirt late model racing was slowly making its way into mainstream America with a regional cable TV package for the Hav-a-Tampa Dirt Race Series, the growth of Eldora Speedway, and more. That led to a surge of new promoters and new venues being built across the country. Big money races would typically draw 40 cars or more on a given weekend.

With new promoters and other promoters booking more big money races, there were also problems with promoters passing bad checks. Even a handful of Hav-a-Tampa races saw drivers receiving bad checks for their efforts.

By the early 2000’s, the Speed Channel took over broadcasting tape-delayed races for the Hav-a-Tampa/UDTRA series. That led to viewers across the country catching these races on television. Things on the outside looked good. But on the inside, many felt some critical adjustments needed to be made to grow the sport even more. 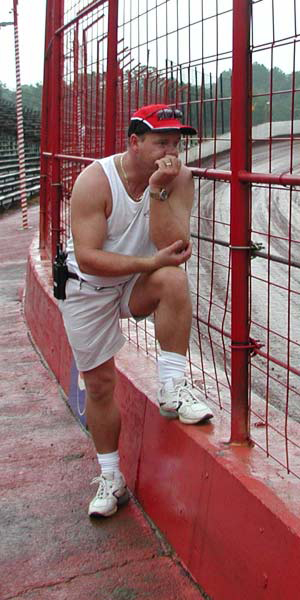 Those factors led to a little known meeting that took place in the late summer of 2002. Carson Branum, then owner of Tennessee’s Atomic Speedway, spearheaded the meeting to get drivers, promoters, and series officials on the same page to take the sport to the next step and iron out critical issues.

Branum had turned Atomic Speedway into one of the top dirt tracks in the country. He held numerous big money events, made numerous facility upgrades, and made the racing surface for the 1/3-mile Tennessee track into one of the best in the country. Branum’s reputation had him leading the efforts to put clay on Bristol Motor Speedway in 2000 and 2001.

Ironically, as the 2002 season unfolded, Branum was having his own money problems, which led to drivers and employees getting checks that bounced. It was ironic Branum directed a meeting where bad checks were one of the main topics.

The meeting Branum assembled was a who’s who of dirt late model racing in 2002. Mike Swims, director of the UDTRA series, was there along with several other series employees. Car owners and builders such as Sanford Goddard and Clayton Christenberry were also there. People with the Speed Channel attended the meeting, including Doug Bland. Bland would ultimately buy the UDTRA series and re-brand it the Xtreme DirtCar Series.

Many of the sports top drivers made their way to Knoxville, Tennessee for the meeting. Scott Bloomquist, Freddy Smith, Ray Cook, Dale McDowell, Rick Eckert, Steve Francis, and others.

A number of the topics that came up shaped today’s dirt late model racing. The previously mentioned issue with bad checks was a sore spot with drivers, especially Bloomquist who received a bad winner’s check from a track in the Midwest. Bloomquist pushed for the series to step in to get his money, something Swims said he was working on. Today, purses with the Lucas Oil Late Model Dirt Series are basically guaranteed, the promoter holding the event must have a line of credit in case the full purse cannot be paid. It is rare to hear about bad checks today except for a few tracks here and there holding a regional event or a weekly race. 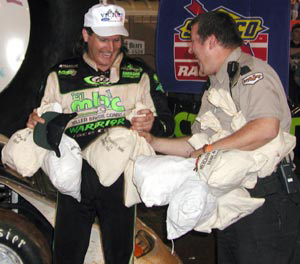 Scott Bloomquist gets money bags for an Atomic win.

Drivers brought up the idea of having less two-day shows on most weekends. In 2002, most national events used the format of qualifying and heats on the first night, followed by consolation races and the 100-lap feature the second night. Most of those racers were $10,000 to win affairs. Drivers pointed out it was hard to make money if you had a bad first night, their weekend was basically shot. They lobbied for more standalone races on two different nights. Their point was if they had a bad first night, they had a whole new program the next night to salvage the weekend.

Swims and Branum countered by saying they did not know if tracks could handle paying two separate purses for the weekend. When the World of Outlaws Late Model Series resurfaced in 2004, they began having a complete show on one night except for certain big money races that had large purses. Today, it is rare to a see two-day show even with a large purse.

The role of television was also a topic. Branum chided the Speed Channel contingent for their coverage and the amount of money they charged tracks to record an event. A few years earlier, Branum had a deal with a local TV station to record some of his weekly races and broadcast them a week or two later on Saturday afternoons.

Branum’s beef with Speed Channel was their production was not much better than the local TV station for a lot more money. Mark Allen, who was the voice of the UDTRA series on Speed Channel, took exception to Branum’s comments at the meeting. They traded opinions back-and-forth with no real resolution on the topic. In recent years, Lucas Oil races were recorded for MavTV, something still done today. But today, those races are usually broadcast live on their streaming service, Lucas Oil Racing TV, and are then shown on a delay on MavTV, NBC Sports Network, and CBS Sports Network. World of Outlaws races are broadcast live on DirtVision.

Taking the sport to the proverbial “next level” was also a topic, which mainly revolved around sponsorship. This is where Bland showed his vision for the sport, something he would put to use when he obtained the UDTRA series months later. Bland had numerous ideas about getting more high profile sponsors into the sport – everything from having sponsors be treated to an A-1 experience with signage and having their own private spot to take in a race to allowing sponsors to set up booths for more visibility to fans and drivers. Today, sponsors play a key role in the success of race series, race tracks, and race teams. Several Fortune 500 companies are a regular fixture in the sport.

It is difficult to say if many of these issues would have eventually worked out without the meeting or the sport would have taken a much different turn. It is the only time a gathering of this magnitude had taken place to address these issues and hear from everyone on all sides of the sport openly discuss the issues and possible solutions.

Working for Atomic Speedway at the time, I was fortunate to be invited to attend this meeting. I was a neutral observer who learned a lot about the sport, at that time, and obviously still have strong memories of the meeting to this day. It is something I will not soon forget.