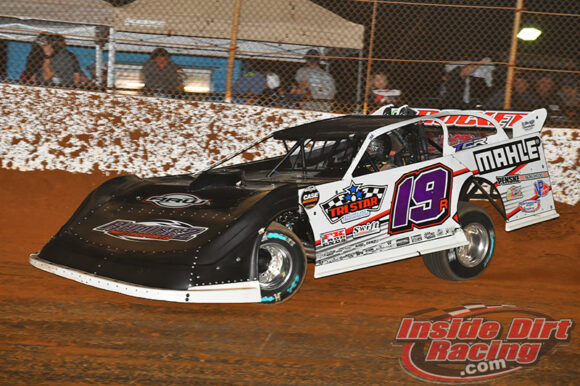 Ryan Gustin made a last lap pass for the lead

Ryan Gustin pursued Dale McDowell over the final 13 laps of the Stateline Showdown and his persistence paid off on the final circuit as he parlayed a last ditch slide job into his second career World of Outlaws CASE Construction Late Model Series victory. The No. 19R machine captured the more lucrative of the two nights of racing action held at the Boyd’s Speedway.

The Rocket Chassis driver from Marshalltown, Iowa was awarded $20,000 for his efforts in a race held on the third-mile track located in Ringgold, Georgia.

A total of 41 cars were signed in for competition

Feature Re-cap: Bronson took the lead on the start of the 50-lap feature ahead of McDowell, Erb, Gustin and Madden. McDowell wasted no time going to the front as he immediately began to harass Bronson and ultimately grabbed the lead on lap 3. Then as the No, 17m machine pulled away, Bronson, Erb, Gustin, and Madden fought furiously over the remaining positions within the top-5.

McDowell began to encounter slower traffic on lap 11 but was able to maintain his advantage over his pursuers as he picked his way through the tail of the field. Meanwhile, the battle continued to rage further back as Erb, Bronson and Gustin went three-wide for second on lap 21 with Gustin sliding into the runner-up spot with Erb and Bronson trailing.

The race settled into a rhythm with McDowell looking as if he might cruise to victory. However, things changed when a lap 35 caution flag flew for the slowing car of McIntosh.

Two laps later, another yellow flag was displayed to the field in Millwood slowed. On that ensuing restart, McDowell again looked as if he would run away and hide from the pack until Gustin began running a high line right out against the cushion of the track which allowed him to reel McDowell in.

as the cars took the white flag, Gustin made a charge to the inside at the entrance of turn one. Both cars slide up the track with Gustin emerging from the corner with the race lead. From that point, he was able to outrun McDowell to the checkered flag.