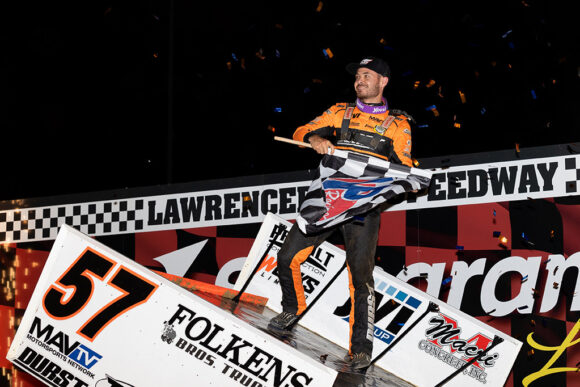 It started on Sunday evening, when “Yung Money” cashed in for a dominating crown jewel victory at Charlotte Motor Speedway’s Coca-Cola 600. The Team Hendrick driver crossed the finish line for his eighth career NASCAR Cup Series win at 10:27pm.

Less than 24 later, at 10:15pm on Monday night, Larson found victory lane again at Lawrenceburg Speedway. Only this time it was aboard the Paul Silva owned #57 for his 21st career World of Outlaws NOS Energy Drink Sprint Car Series win.

He conquered the best on pavement, and the best on dirt. It was the first time in the history of Motorsports that a driver has topped both the NASCAR Cup Series and the World of Outlaws Sprint Cars in consecutive days.

“It’s really cool to win that [NASCAR] Cup race last night and then come here in a totally different race car, totally different atmosphere and get it done again,” Larson spoke on his remarkable accomplishment. “I think it shows that I’m in such great equipment all around from the #5 Hendrick Cup car, Paul Silva’s #57 right here, and even the Late Model with Kevin Rumley. It’s been a lot of fun lately.”

Larson’s path to a popular win at the Lawrenceburg, IN 3/8-mile wasn’t exactly easy.

Yes, the Elk Grove, CA native did tear apart dirt racing with 46 total triumphs last year, 12 of those against the World of Outlaws. However, it’s been much more of a struggle since the 2021 season started. Larson and Silva went 0-for-6 through Bristol, Jacksonville, I-70, and Williams Grove. They didn’t just not win, they didn’t even make it on the podium up to this point.

That all changed in Monday’s Memorial Day Spectacular; an event Larson considers the true start to his summer slate in Silva’s Finley Farms #57.

“I’ll be honest, we’ve really been struggling this year in the #57,” Larson admitted afterwards. “Lawrenceburg is always at the right point in the season for us to get going, though. Hopefully this moves us forward in the right direction.”

Starting from the outside pole of the 35-lap NOS Energy Drink Feature, Larson took the green flag with Aaron Reutzel alongside him on pole position.

Reutzel of Clute, TX bolted to the initial lead and paced the opening 10 circuits aboard the Roth Motorsports #83. The duo ran through lap traffic until Larson got the best of him on Lap 11 and slid by with an inside move through turns three and four.

Larson led from there to the finish, but it didn’t come without challenges. Reutzel was mighty cutting away at his advantage with less than ten-to-go when one slip on the cushion sent his #83 for a wild flip on Lap 28 and removed him from the running.

Logan Schuchart, who set Slick Woody’s QuickTime and won his Team Drydene Heat Race, was next in line and got the closest of all to the rear bumper on the #57. If it weren’t for Larson’s presence of mind to peep the DIRTVision big screen down the backstretch, Schuchart quite possibly could’ve stolen the win away.

“I actually snuck a look at the big screen and saw Logan right behind me there at the end, so I changed it up a bit,” Larson mentioned on the final laps. “I wasn’t sure what to do, so I just tried to take some of his air away. Lawrenceburg is such an awesome track. It’s so technical with all the waves, holes, and a thick cushion. I hope all the fans had as much fun as I had driving.”

Closing out the podium at Lawrenceburg was Logan Schuchart of Hanover, PA and Sheldon Haudenschild of Wooster, OH.

It was a career-best finish at the high-banked track for both the Team Drydene #1S and the NOS Energy Drink #17.

“We might have to take that big board down soon.” Schuchart joked. “He’s a smart driver, though, I knew he either heard me or saw me coming. My heart said to fly it across the middle, but my brain told me the opposite. We’ve never had a top-ten here, so a second-place run is pretty good too.”

“I don’t know that I even needed much more from the car tonight,” Haudenschild thought. “We were good, it was just about surviving this one. I’m just glad we can keep putting this NOS Energy Drink #17 up here on the podium.”

Buddy Kofoid of Penngrove, CA drove the Swindell SpeedLab #39 to a career-best fourth-place finish from tenth. Closing out the the top-five and matching his season-best of fifth-place was Kerry Madsen in the Tony Stewart Racing #14.

Rounding out the top-ten was Kraig Kinser in sixth, Brad Sweet in a backup car from 24th-to-seventh, Donny Schatz in eighth, Carson Macedo in ninth, and Lachlan McHugh of Australia finishing tenth in his World of Outlaws debut.

UP NEXT: The World of Outlaws NOS Energy Drink Sprint Car Series has three days off to make the 15-hour haul west. This weekend, The Greatest Show on Dirt visits River Cities Speedway in Grand Forks, ND on Friday and then heads to Granite City Speedway in Sauk Rapids, MN on Saturday.