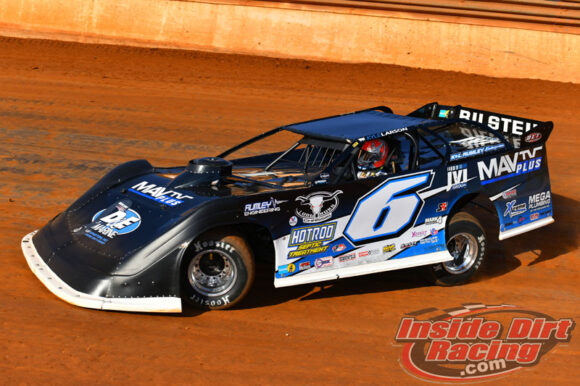 The World of Outlaws Morton Buildings Late Model Series rolled into the legendary Fairbury American Legion Speedway on Saturday night to contest one of its most lucrative and highly anticipated events of the year. When all was said and done, it was NASCAR Cup Series star Kyle Larson who came away from the Illinois track with the much coveted trophy. The Elk Grove, California driver earned a hefty $50,000 for his efforts in a race shown live by DirtVision.com.

Qualifying and heat races were contested on Friday night. Click here to read those results.

Frank Heckenast Jr. and Brandon Overton transferred to the feature from the first Last Chance Showdown race while Nick Hoffman and Garrett Alberson moved on to the main event out of the second LCS.

Devin Moran and Ashton Winger were the final two drivers to make the PDC after they finished first and second in the third and final LCS.

At the start of the 100-lap feature it was Pierce who went to the lead with Gustin, O’Neal, Scott and Owens trailing. Pierce broke away from the pack as furious battles for the other top-10 positions raged with Babb sailing by his competitors on the outside up to the third spot.

On a lap 10 restart, Larson began to make his move toward the front as he broke into the top-5 by passing Owens. At the same time, Davenport also began to rumble as he too took a position away from Owens.

Further ahead, Babb worked on Gustin for the second spot as Pierce again slipped away from the field before another yellow flag would wave on lap 15 for the slowing car of Chris Simpson.

Davenport moved around Larson for fourth when the green flag waved then both of those drivers passed by Babb to assume the third and fourth positions on lap 19. Five laps later as cars raced all over the multi-grooved FALS track, Larson took third away from Davenport.

A lap 27 restart provided Larson with another opportunity to move forward as he blasted to second. One circuit later the No. 6 machine moved inside of Pierce and issued a challenge for the lead. Laps 29 and 30 saw the two driver exchange sliders with contact being made and Larson ultimately claiming the to spot.

Pierce glanced off the outside wall dislodging a piece of this rear spoiler causing a caution flag for debris.

Once in the lead, Larson controlled the pace of the and stretched his advantage. Meanwhile, the likes of Pierce, Scott and Davenport wrestled for the right to become Larson’s closest pursuer. Scott briefly moved ahead of Pierce on lap 42 as both cars closed in when Larson began to encounter slower traffic at the halfway mark.

Pierce regained second by moving around Scott on lap 55 as Larson again began to separate himself from the competition. By lap 75, the No. 6 machine led by as much as four seconds over Pierce, Babb, Madden and Davenport.

A lap 78 caution would bunch the field and provide an opportunity to challenge Larson. Instead, Babb got by Pierce for second as ‘Yung Money’ pulled ahead. Pierce would return the favor and pass Babb for third on lap 80.

As the laps clicked away, Pierce used the high line around the track to tighten the race for the lead while Larson remained in the middle of the track through the turns. At one point with 10 laps to go, Pierce appeared poised to make a move. However, Larson was able to use slower traffic to his advantage and drive away to the checkered flag.

It was the biggest Late Model win of Larson’s brief career in this form of racing and his first with the World of Outlaws Morton Buildings Late Model Dirt Series.