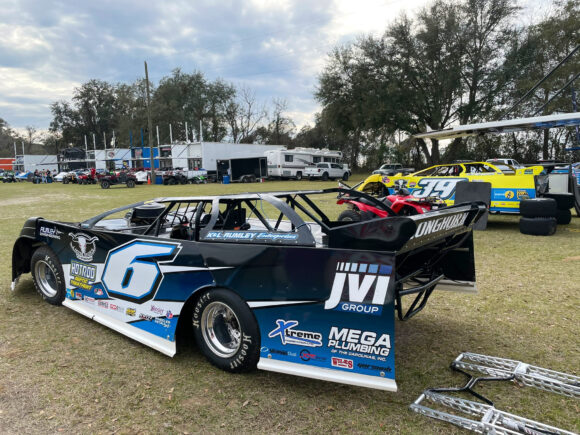 After weather forced the cancellation of the scheduled season opener on Friday night at All-Tech Raceway, the Lucas Oil Late Model Dirt Series took to the track on Saturday evening to kick off its 2021 campaign. At the end of the night, it was NASCAR star and Lucas Oil Chili Bowl winner Kyle Larson who scored a dominating win in front of a packed grandstand at the Lake City, FL facility. The Elk Grove, CA driver picked up $15,000 for his efforts in a race shown live by MavTV and Lucas Oil Racing TV.

Tyler Erb led the way in Group A qualifying by turning a lap of 17.895 seconds around the half-mile clay oval to beat out Devin Moran, Brian Shirley, Ricky Thornton Jr., and Mark Whitener.

Mike Marlar proved to be quickest in Group B time-trials and established a new track record with a lap of 17.793 seconds to top Kyle Strickler, Kyle Larson, Brandon Overton, and Kyle Bronson.

Tyler Erb earned the pole position for the feature by virtue of his victory in the first heat of the night bringing Gregg Satterlee and Jimmy Owens to the feature along with him. Devin Moran took the second heat by besting Brandon Sheppard and Tim McCreadie.

Brian Shirley was the victor in the third heat over Chase Junghans and Hudson O’Neal.

Brandon Overton would start the main event from the outside of the front row after winning the fourth preliminary just ahead of Mike Marlar and Shane Clanton while Kyle Bronson bested Kyle Strickler and Earl Pearson Jr. in the fifth heat.

Jesse Stovall and Josh Richards transferred to the main event out of the first B-main of the night then Rick Eckert and Frank Heckenast Jr. earned feature starting spots out of the the second B-main.

At the start of the 50-lap feature it was Erb, Moran, Overton, Bronson and Larson. Soon after the start, Larson would begin his march forward as he took fourth away from Bronson on the second circuit. He then moved up to third by passing Overton on the sixth lap.

Larson grabbed the runner-up position by passing Moran on lap 9. As the leaders closed in on slower traffic in the race that ran caution free, the No. 6 Longhorn Chassis machine swept by Erb for the race lead on lap 14.

Moran took second from Erb on the sixteenth circuit as Larson motored away from the pack.

Marlar, who announced prior to the race that he would run the Lucas Oil Late Model Dirt Series throughout 2021, broke into the top-5 by passing Bronson. The No. 157 car then drove around Overton to secure fourth on lap 23.

Further back, defending Lucas Oil Late Model Dirt Series champion Owens and defending World of Outlaws Morton Buildings champion Sheppard fought over the fifth spot as they exchanged positions over the course of several laps. Owens would eventually win that battle with both drivers ultimately getting around Erb and moving up to fourth and fifth respectively.

But in the end, it was Kyle Larson, who will drive on the NASCAR Cup Series for Hendrick Motorsports in 2021, who cruised under the checkered flag with a 15-second lead over the second place finisher. It was his second victory in the series after having won last season at Pennsylvania’s Port Royal Speedway.

“I’ve been asking a lot of people how to run the bottom and stuff like that,” Larson said in his victory lane interview with MavTV reporter Dave Argabright. “I’ve been really bad every time I get in a Late Model being able to move around. I can run the top good but being able to move around, I haven’t been very good. I was just trying to be a lot smoother with the stuff I was doing in the cockpit. Gosh, my race car was so fast. I could go anywhere I wanted.”

Larson was complimentary of his car owner and engineer.

“Kevin Rumley and everybody who works on this thing make it such a pleasure to team up with them. Getting our second win together was really special. I couldn’t believe I won Port Royal and I really can’t believe I won here.”