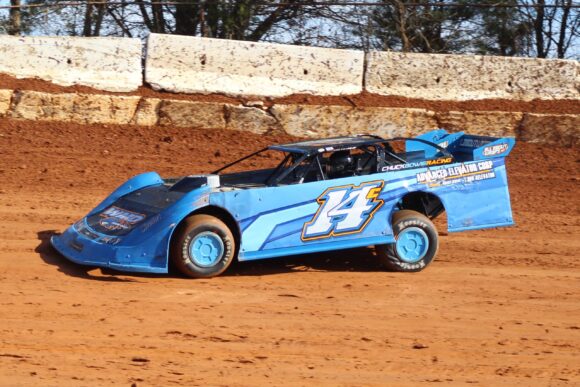 Kyle Hardy made a late race pass then drove to victory

The 604 Crate Late Model division took to the track on Saturday at 411 Motor Speedway to play a part in the 11th annual Hangover event. When all was said and done, it was Kyle Hardy who came away from the Seymour, TN track with the win. The Stephens City, VA driver earned $1,500 for his victory.

The top-12 of the 29 cars taking making a qualifying effort were locked into the feature.

Brian Smith and Dustin Linville won the two B-main races used to set the remainder of the feature lineup.

The start of the 30-lap feature was marred by a scary looking incident triggered by contact between front row starters Sise and White. As the two machines entered turn one just as the completion of the first lap, White’s left front tagged the right rear of Sise’s machine. Sise was sent sliding up the track where it then caught in the loose dirt and eventually came to rest on its side.

The car briefly caught fire but track personnel quickly extinguished the flames. Sise got out of his car under his own power and immediately showed his displeasure with White, whose car had come to rest at the bottom of turn one.

When the red flag was lifted, Herrington held the lead with McCarter, Miller, Lowe and Hardy trailing. Miller eventually pulled off track and out of the race as the cars circulated under yellow flag conditions. On the lap 1 restart, Hardy passed by Lowe to grab third as Herrington led McCarter.

The caution was again displayed to the field on lap 4 when Ballenger slowed. On the later restart, Hardy again improved his position as he moved around McCarter to assume the second spot. McCarter, who was riding a three-race win streak coming into this event, would later pull off the track on lap 9.

By the midway point of the feature, the top-2 of Herrington and Hardy had separated themselves from the pack with Hardy closing in on the rear spoiler of the lead machine.

After several laps of harassment, Hardy looked inside of Herrington on lap 23 and the two drivers engaged in a two lap lead swapping battle before Hardy emerged as the front runner on lap 25.

From that point, the No. 14C car sailed on to the checkered flag to get the win.