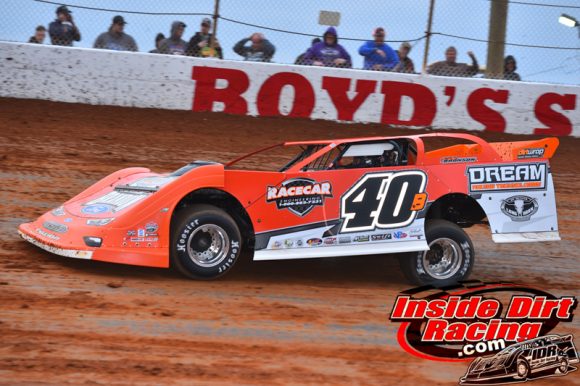 The World of Outlaws Morton Buildings Late Model Series opened its 2021 season on Thursday night in the DIRTcar Sunshine Nationals at Volusia Speedway Park. After a night of high speed action it was Kyle Bronson who was able to take advantage of a late-race tangle by the two lead cars to come away from the Barberville, FL track as the victor in a race shown live by DirtVision.com. The 30-year-old Brandon, FL driver earned $10,000 for his efforts.

Home state driver Kyle Bronson was fastest in Group A qualifying after he sped around the half-mile clay oval in 15.839 seconds to beat out Dale McDowell, Tyler Bruening, Mark Whitener, and Kyle Strickler.

It was Tim McCreadie who proved to be the fastest in Group B time-trials by posting a lap of 16.075 seconds to top Darrell Lanigan, David Breazeale, Scott Bloomquist, and Dennis Erb Jr.

Kyle Bronson took the win in the first heat race of the night ahead of Tyler Bruening, Kyle Strickler and Brandon Sheppard while Dale McDowell outran Mark Whitener, Cade Dillard and Parker Martin in the night’s second preliminary.

Whitener’s finish in the second heat was disallowed after his car failed tech inspection.

On lap 4, Breazeale moved by McDowell to assume a top-5 position. At the same time, the top-2 of Bronson and McCreadie looked as if they were poised to slip away from the field. However, slower traffic would intervene as the leaders fought with slower cars allowing Dillard to catch up.

Dillard took second away from McCreadie on lap 12. Soon afterward, the third running machine of McCreadie slowed and pulled off the track just before a yellow flag for the ailing car of Ross Bailes slowed the action.

Dillard made his move to wrest the lead away from Bronson on lap 22. Two laps later, Lanigan moved around the early leader to grab the runner-up spot. At that point, the No. 97 car began to pull away from his pursuers.

Fifth running Jackson slowed to bring out a caution with five laps remaining which allowed the field to pull up to Dillard’s rear spoiler. On the ensuing restart, Lanigan made a bold move in an attempt to get by Dillard. Slight contact between the two sent Lanigan spinning and did some body damage to Dillard’s machine.

Dillard went back to the lead on the restart. However, Bronson stalked and moved to the lead with three circuits remaining. Dillard fought back but Bronson held off the challenge and ultimately sailed under the checkered flag to capture the win.