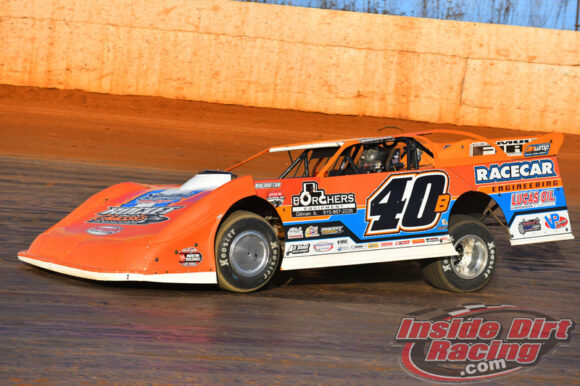 Kyle Bronson won his first career crown jewel at I-80

The Lucas Oil Late Model Dirt Series concluded one of its most lucrative weeks of the 2021 season with one of the richest races of the year on Saturday night at the I-80 Speedway in the Imperial Tile Silver Dollar Nationals. At the end of the night, it was Kyle Bronson who emerged at the winner after building a big lead over the pack at the Greenwood, Nebraska facility. The Brandon, Florida driver received a check valued at $53,000 for his efforts in a race shown live by MavTV Plus.

The first nine rows of the starting grid for the main event was set by using a system of passing points during preliminary heat races held on Friday night.

Terry Phillips and Josh Richards won the two B-main races used to set the remainder of the starting lineup for the feature race.

When the green flag waved to start the 80-lap feature, it would be Junghans who took the early lead ahead of Scott Shirley, Owens, and Bronson. Owens, Bronson and McCreadie fought over positions 4-6 in the early going with O’Neal just behind.

On lap 6, Junghans scraped the outside wall in turns one and two which allowed his pursuers to close in. Bronson began to charge on lap 10 as he blasted all the way up to second by passing Scott. Owens also moved forward by taking fourth away from Shirley on lap 13. Further back, McCreadie, Pearson, and O’Neal wrestled over positions 6-8.

Bronson closed in on Junghans in the race for the lead as those cars worked through slower traffic on lap 15. The lead duo swapped the top spot on lap 19 as Scott and Owens moved in looking for their own opportunity. They again exchanged the lead on lap 22 and 23 before a caution flag waved for the slowing car of Davenport with Junghans still at the point.

When the race returned to green flag action, Owens began to fall back as McCreadie and Pearson streaked by.

A lap 33 caution slowed the action once more when Clanton slowed with mechanical trouble as Junghans continued to lead over Bronson, Scott, McCreadie, Owens and Pearson. On the ensuing restart, McCreadie took third away from Scott while Owens and Pearson contested the fifth position. Pearson emerged from that battle with the position then moved up to take fourth away from Scott on lap 38.

Owens and Hughes continued to push Scott back as they took the fifth and sixth positions respectively as the race reached its halfway point. Hughes then took fifth from Owens one lap later.

The top-3 of Junghans, Bronson and McCreadie ran in tight formation on lap 46 with slower traffic again becoming a factor. As the cars roared under the flag stand on lap 48, Bronson was finally able to assume the lead of the race uncontested.

McCreadie took second away from Junghans on lap 66 with Pearson also moving in to challenge. At the same time, Bronson was in the process of pulling away from the field. Pearson took third from Junghans with 8 laps remaining.

In the end, Bronson sailed away for a 10 second win over his closest pursuers. Prior to the first crown jewel victory of his career, his biggest win had been worth $12,000.