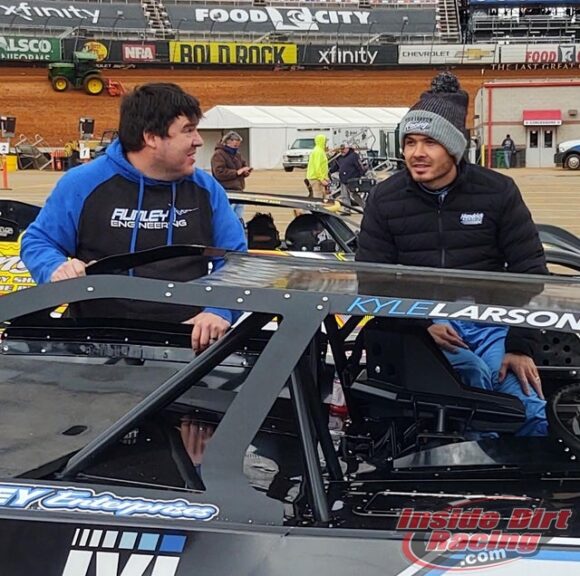 Before he ever sat in a Dirt Late Model, Kyle Larson was one of the most accomplished racers in America – if not the world. Wins in NASCAR, Sprint Cars and Midgets had become commonplace for the Elk Grove, California native over the course of his career. Still, this is a racer who seems to enjoy new challenges which lured him into a new form of competition just under two years ago.

It probably didn’t hurt that the 29-year-old star would be driving a Longhorn Chassis prepared by one of this form of motorsports most highly regarded setup gurus. And that newly formed pairing with Kevin Rumley immediately paid dividends for Larson as he won a Lucas Oil Late Model Dirt Series feature at Pennsylvania’s Port Royal Speedway on his first ever weekend of in that type of car in August of 2020.

From that point, the relationship between the 2021 NASCAR Cup Series champion and K&L Rumley Enterprises has also proven to be a boon for the North Carolina-based team as well. In the 2021 season in which NASCAR did not hold practice or qualifying sessions which opened up free time on his schedule, Larson did even more Late Model racing scoring wins in the LOLMDS season opener at Florida’s All-Tech Raceway, a FloRacing Night in America event at the Brownstown(IN) Speedway, and two World of Outlaws CASE Construction Late Model Series features including the highly coveted Prairie Dirt Classic at Fairbury(IL) American Legion Speedway.

Rumley is no stranger to success himself as his car achieved one of Dirt Late Model racing’s most historic seasons by winning the Lucas Oil Late Model Dirt Series title and numerous crown jewel events with driver Jonathan Davenport in 2015.

The noted Late Model car owner says it is no accident that Larson is among the best drivers of this era in any form of racing.

“He’s such a good person and so disciplined,” Rumley pointed out in an interview with InsideDirtRacing.com. “He’s ready every time he comes to the race track and he just concentrates on driving. He has a very open mind about setups so we can kind of do what we want without a driver having any preconceived notions.” 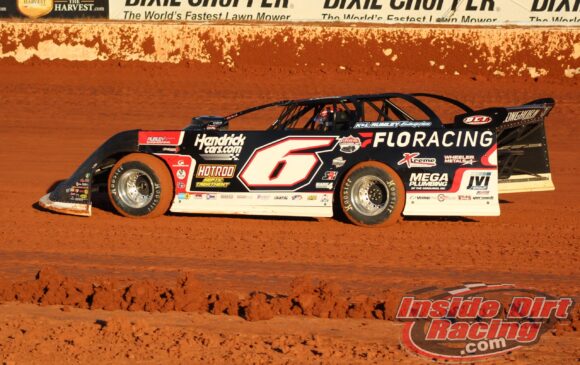 Kyle Larson in the No. 6 Longhorn Chassis prepared by Kevin Rumley

Whenever a driver who has won a NASCAR Cup Series championship, Sprint Car crown jewels such as the King’s Royal and the Knoxville Nationals as well as the Chili Bowl Nationals for Midget cars is in a dirt track pit area, a crowd of fans, media, and even other competitors is bound to gather in close proximity to the car as it is being prepared.

While having so many well-wishers in the pit area is energizing it could lead to a misstep, Rumley and his crew have learned to handle any potential distractions. And, of course, the pay off of working with one the sport’s biggest attractions is worth any inconvenience that might come along with those crowds.

“You just tune it out,” Rumley explained. “Being fortunate enough to have a driver like Kyle Larson, you kind of know what you sign up for. You have to have a good attitude about it.”

Rumley earned a degree in Mechanical Engineering from the University of North Carolina at Charlotte soon went to work in the racing industry for CV Products. He and his father Lee Roy Rumley formed K&L Rumley Enterprises to field race cars on a part-time basis for drivers such as Steve Shaver, Booper Bare and Randle Chubb. Then in 2012, the father and son were approached by NASCAR champions Terry and Bobby Labonte to help with the development of their Longhorn Chassis brand.

In 2014, the Rumleys brought in Jonathan Davenport to drive their No. 6 machine which led to that historic campaign the next year.

Larson often speaks highly of Rumley when asked about racing Late Models which is gratifying to the engineer.

“It is and it’s likewise,” Rumley declared. “I have so much respect for him and what he does. He’s very good and he’s serious about working to be very good. We’ve become good friends. We’re friends with his whole crew and his crew chief, Cliff Daniels, and we don’t miss his (NASCAR)races.”

Rumley very much wants to succeed with Larson in the driver’s seat of his car.

“The goal is always top-threes but he’s used to winning and he wins a lot so it’s very gratifying for him to win since he’s not a regular Late Model driver,” Rumley said. “He says this is the most challenging form of motorsports that he’s tried to do. The cars are so different and so hard to drive. My attitude is that if we don’t run competitively, he’s going to lose interest, so it’s win or die.”

Plans are for Larson to be behind the wheel of the Rumley No. 6 this weekend in the Karl Kustoms Bristol Dirt Nationals at Bristol Motor Speedway.

Turn 2 Blog: First Bristol Weekend in the Books & Takeaways from WoO at Cherokee