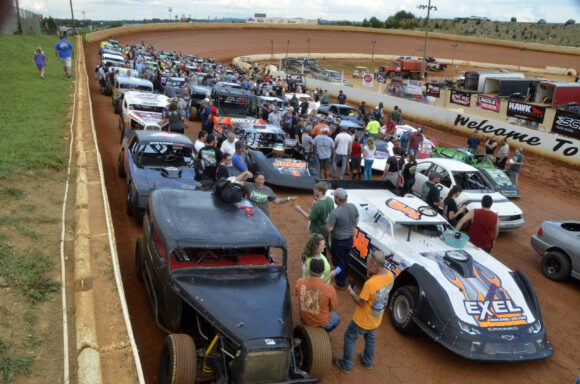 BULLS GAP, Tenn. (Aug. 22, 2020) — Through the years Fan Appreciation Night featuring $5 adult grandstand admission has always been a much-anticipated event at Volunteer Speedway. Both fans and drivers enjoy the on-track activities with meet-and-greet and getting up close looks at the race cars down on the front straightaway and infield pits prior to start of racing.

Big crowd, along with an action-packed seven division racing program at “The Gap,” is a guaranteed winning combination for Fan Appreciation Night presented by Contingency Connection Racer Rewards.

Jensen Ford was fastest in Crate Late Model qualifying and he was also quickest over the first 10 laps of the feature, leading Drew Kennedy and Cameron Weaver. But Ford’s night ended when he slowed to a stop high in the banking between turns three and four to bring out the caution with an overheating engine due to the fan blade breaking. Kennedy assumed the lead for the restart and once back green he never looked back en route to capturing the win over Weaver, Brad Lowe, Deke Waters and Brad Dyer. … Completing the top 10 finishers were Layne Clifton, Chris Chandler, Tim Maupin, Nathan Martin and Kenny Ford.

Travis Fultz rocketed out to lead at start of the 2o-lap Sportsman Late Model feature over Addison Cardwell of Knoxville, Dustin Ratliff, Clyde Stanton and Kip Sawyer. With Fultz holding a commanding advantage out front, his race ended on lap 11 when he spun between turns three and four to bring out the caution flag. Back under green with the third generation racer Cardwell out front riding on the point, he smashed the loud pedal over the final nine laps to win his second race of the season over a hard-charging Warren McMahan, Sawyer, Ray Jarnagin and David Bullington.

Veteran driver Bobby Mays of Jonesborough is a highly decorated racer during an illustrious career at “The Gap,” with many victories and also championships to his credit. Mays won the Crate Late Model title back in 2007, captured three Sportsman championships (1999, 2000, 2003), and one Super Stock title in 2000. The 58-year-old stepped away from racing Crate Late Models last season and thought he was finished with racing – that is – until opportunity presented itself to get behind the wheel of a Classic. Competing in only three races in 2020, Mays had recorded back-to-back second-place finishes and in his first outing while feeling the new ride out finished seventh. Mays is an over-the-road truck driver during the week and he felt like his time to shine was imminent. Mays captured his first Classic feature win by outrunning two-time defending division champion John Stevens by leading flag-to-flag in the 20-lap race. Finishing third through fifth, respectively, were Adam Engel, Tim Bounds and Charles Bates.

Dustin Duncan jumped out to lead at start of the Front Wheel Drive feature over Zack Walton, who had won four straight races. With laps winding down and Duncan holding an eight car-length advantage over Walton, lapped traffic came into play and Walton drove to inside of Duncan racing into the first turn challenging for the lead. As the duo raced off the second corner contact was made on the backstretch and they wrecked to bring out the caution flag. Jason Ketron of Kingsport inherited the lead and withstood pressure from his father, John Ketron, to record the win. Rounding out the top five finishers were Darrell Teffeteller, David Trent and Jeremy Powell.

Did Not Start: Brandon Waller #71