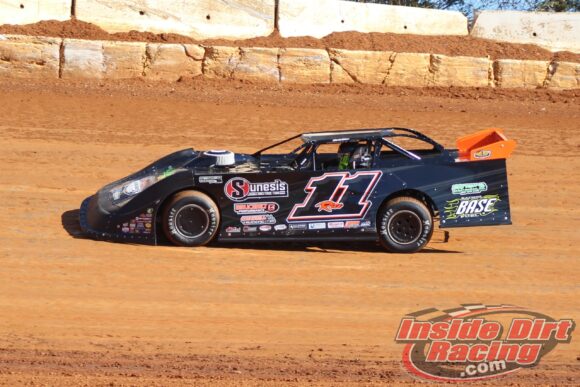 The Lucas Oil Late Model Dirt Series took to the track at the Florence Speedway for the Ralph Latham Memorial to complete a two-race weekend. When all was said and done, it was Josh Rice who ultimately scored the win after a night of intense racing on the Union, KY track. The Verona, KY driver earned $15,000 for his efforts in a race shown live by MavTVPlus.

Stormy Scott proved to be fastest in Group A qualifying by touring the half-mile track in 15.504 seconds to outpace Josh Richards, Jonathan Davenport, Shane Clanton, and Devin Gilpin.

It was Devin Moran who led Group B time-trials with a lap of 15.642 seconds beating out Josh Rice, Mike Marlar, Dustin Nobbe, and Hudson O’Neal.

Jonathan Davenport earned the pole for the feature by taking the first heat race over Stormy Scott, Chris Ferguson, and Devin Gilpin while Josh Richards was victorious in the second preliminary ahead of Shane Clanton, Ricky Thornton Jr., and Tim McCreadie.

Darrell Lanigan and Tyler Erb won the two B-mains used to set the remainder of the starting grid.

Davenport went to the early lead at the start of the 60-lap feature with Richards, Scott, Moran and Rice following. A three-wide battle just behind the race leader was engaged on the second lap with Scott ultimately emerging with the runner-up spot. Rice was also on the move as he took fourth.

On lap 5 the three cars of O’Neal, Ferguson, and Moran battle three-wide for fifth before O’Neal captured the position. However, a lap 6 caution for the slowing car of Darrell Lanigan slowed the action.

When the racing action resumed, O’Neal jumped up to third with a fierce fight taking place among the likes of Richards, Rice and O’Neal exchanging places. However, a big crash on lap 12 involving Owens, Thornton, Marlar and James again put a damper on the action.

On the restart, O’Neal came to second and immediately moved up to challenge Davenport for the race lead. On lap 17, the No. 71 established itself as the front runner as Davenport fell back into the clutches of the hard charging Rice.

Davenport, Rice and Scott engaged in a fight for second on lap 24 with Rice ultimately taking the spot.

Just after the halfway mark, Erb came from deep in the field to emerge as a contender when he passed by Richards to take fifth. At the same time, O’Neal and Rice ran in tight formation as they began to battle for the race lead.

After a lap 32 restart, the two young guns at the front of the field began a lead swapping battle that thrilled the assembled crowd. Rice would use a slide job in turns one and two to briefly get ahead then O’Neal would perform a crossover maneuver to reclaim the position as the cars would roar down the back stretch as this went on for multiple laps.

At the same time the leaders were fighting, there were battles for position all throughout the field.

With just four laps remaining as the front runners worked through slower traffic, Rice was finally able to make a move that would stick when he got by O’Neal to claim the lead. From that point, the No. 11 machine was able to maintain his advantage until it sailed under the checkered flag to score the victory.